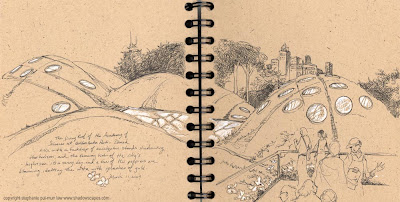 I braved San Francisco's traffic again to drive to Golden Gate Park. It was one of those rare and perfect days in SF - the kind that tourists are always expecting and hoping for when they come to California, but that the city rarely lives up to (fog and wind usually being the bywords). I dug up my little travel sketchbook to take with me. It's been denied entries for far too long.

I think perhaps I need to start a new sketchbook. This one has become too... "precious", to use a word my old Berkeley art professors would have said with a sneer. The original point of the sketchbook was to make impromptu impression drawings, quick, fresh, and on the spot. I think I'm too concerned with making the drawings look good rather than just doing them now. Need to shake things up a bit. Perhaps try with a brush pen next time.

Met up with Horatio at the De Young museum for a quick lunch. He had already seen the Andy Warhol exhibit that morning while waiting for our rendezvouz. The other special exhibit was Yves Saint-Laurent. We decided to head over to the Academy of Sciences and see what that had to offer before deciding which one to spend the afternoon at. I hadn't ever been to the Academy yet, but had been hearing all kinds of fun things about it lately from friends, so my curiosity was piqued. In the end the Academy won out. 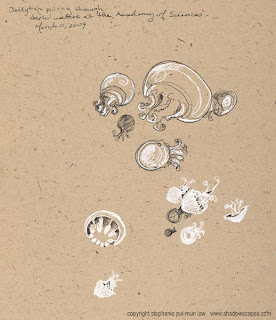 We visited the indoor rainforest exhibit, the planetarium, and the aquarium. At one point, the sign to the Living Roof beckoned us, and we followed the stairs up. There was a light breeze, and it was beautifully sunny.

The Living Roof is exactly what it sounds like, a carpet of rolling green hills that cap the Academy in poppies and strawberries and wild grasses, tying the environment of Golden Gate Park to the building itself. There is a backdrop of eucalyptus stands shadowing the horizon, and the faraway hint of the city's highrises. Rows of round glass peer down to the inside of the building below, like high-tech fairy windows into a mound.

Made some more moderate progress on my Queen of Cats painting. Getting to the fun part now: the cats! 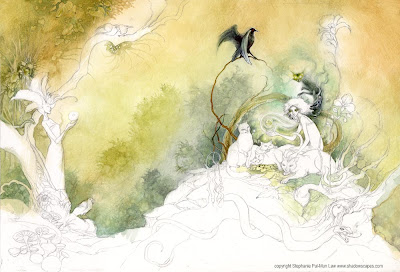 I saw an anaconda at the Academy. Took lots of photos for him for reference for the snake in this piece. The anaconda was enormous. Half-submerged under a pool of water, lazily eying the food that had been provided for him (or perhaps he had killed the rabbit himself, I didn't see).
Posted by Stephanie Pui-Mun Law at 9:25 AM