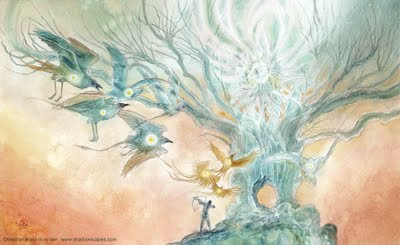 There was once a time when there was not just a single sun in the heavens, but ten suns. These ten suns were embodied in the forms of celestial Sun-Birds, who lived in a mulberry tree far out in the eastern sea.

Alternating amongst themselves each day, it was the task for a single one of the Sun-Birds to spread his wings and fly over the lands, to light the skies. As he soared across the vault of the heavens, the sun\'s glorious radiance bought warmth and life to the fields and people. In a day-long journey, the Sun-Bird flew to the western mountains. Each night, that Sun-Bird would come back to roost at the mulberry tree amongst his siblings.

Day after day, the Sun-Birds performed their duty, until they bored of the routine. On that fateful morning, they all took flight, in a burst of overwhelming flame and glory. The ten Sun-Birds flew out across the lands, and the people cried out in pain at the furnace that opened up from the heavens with the heat of ten suns beating down upon rice fields and rooftops and heads.

It fell to the Archer God, Houyi to remedy the situation. Drawing his great bow, he shot down nine of the ten Sun-Birds. So it is today, that there is but a single Sun. 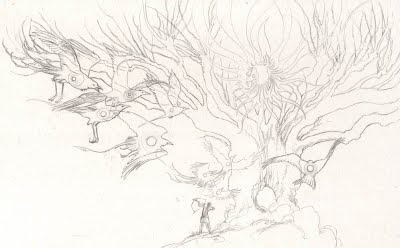 On the drawing board.
Posted by Stephanie Pui-Mun Law at 7:26 PM 8 comments: 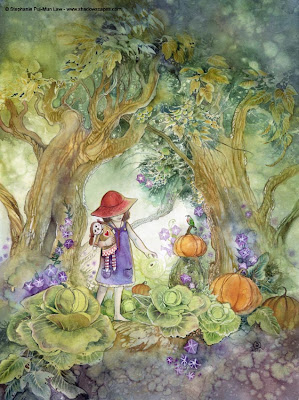 Final painting for this Realms of Fantasy Magazine story. Should be in an upcoming issue in next few months, story entitled "Isabella's Garden", by Naomi Kritzer.
Posted by Stephanie Pui-Mun Law at 12:37 PM 1 comment:

Sketch for an upcoming Realms of Fantasy Magazine story. Always fun to work on these! 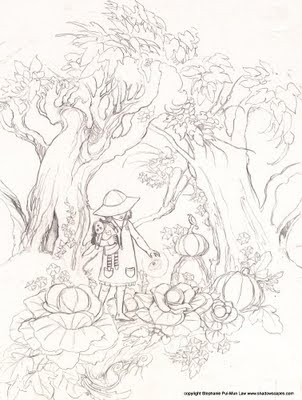 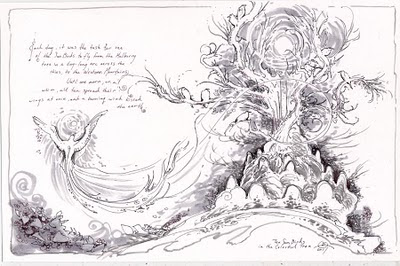 Another little something I did while at wondercon last weekend.

This is an ink drawing on bristol board. It measures 11x7 inches. Grey, brown, and black inks were used. On sale -at my etsy shop-.

Brainstorming for the next painting, which will be on this story.

According to Chinese legend, there was once not just a single sun, but ten.

Ten sun birds lived in a mulberry tree in the eastern ocean. Each day, one of them would make the day-long journey across the skies to the western mountains. Until one day, all ten descended on the earth at once, and the archer Houyi was forced to shoot down all but one of the wayward sun birds.

The text on this piece says:

Each day, it was the task for one
of the Sun Birds to fly from the Mullbery
tree in a day-long arc across the
skies, to the Western Mountains.
Until one morn, on a whim, all ten spread their
wings at once, and a burning wind kissed
the earth.
Posted by Stephanie Pui-Mun Law at 4:35 PM No comments:

ACEOs (from wondercon) on etsy

While at Wondercon this past weekend, during the lulls in traffic, did these ACEOs. They're on sale at my etsy shop now for $25.00 each. 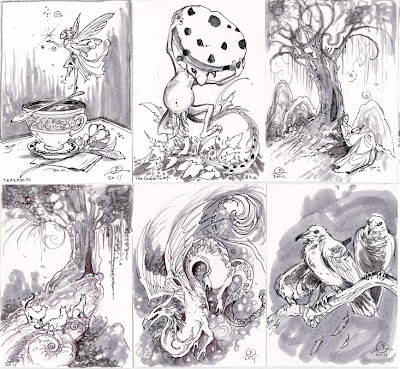