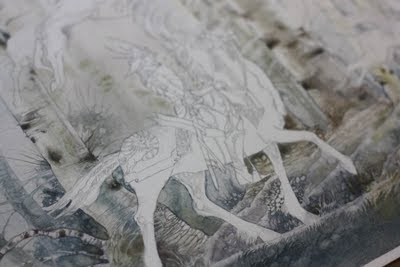 Making slow and steady progress on my white knight. Had a fun two weeks of flu and cold back to back (one of the hidden joys of motherhood) and so wasn't feeling up to doing a whole lot. But it's shaping up nicely. Many times when I'm working on a painting and finish it over the course of a week, it's too fast to get any perspective and objectivity, and I end up absolutely hating the piece and thinking it's awfulterribad. Only after a week or two of shutting it away in my closet can I look at it and see that I do like it (or not). Working much more slowly like this, I'm having more time to get a clearer opinion of the piece as I go, and what things to change, and what direction to move. So I suppose it's having its benefits as well! 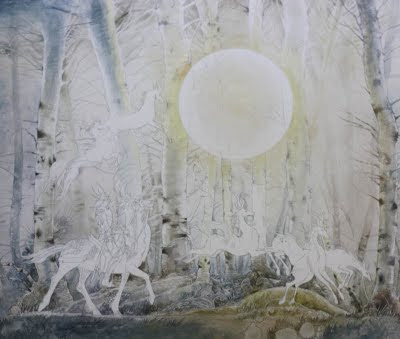 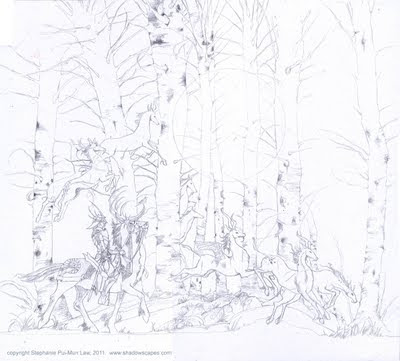 "White Knight of Bright Morning" I think will be the final title, in reference to Baba Yaga's white knight. This is a concept I've had rattling around in my brain for many years now actually, waiting for me to have the time to tackle. There will be three pieces to the series eventually, with the Red Knight of day, and Black Knight of the night to complete the set. This is 18x21 inches. One of the larger pieces that I've done in a while.

Here were the initial sketches that led up to the final:

From my sketchbook. Focused first on the knight on his horse. Was tempted to make it a unicorn, for the purity and new dawn that the white knight represents, but managed to steer away from that with instead a headpiece on the horse mounted with stag horns; giving it a little of the connotations that a unicorn has, of innocence and sacrifice, but also binds it to some more earthy images and traditions. I wanted the composition to be panned out from the knight a bit, with the sun a looming presence through the trees; perhaps even glowing ghostly through the outlines of the trees. A grove of birches - stark white/grey/blues. 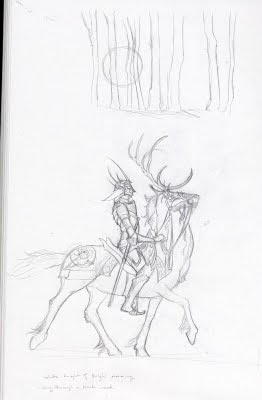 After scanning the initial sketch, I could play around with it in photoshop for the final proportions. Extended the trees up. Added more deer/antelope/stag-ish creatures leaping in shadow forms through the trees. They will be translucent, ghostly. For this mockup, I actually just cut and pasted deer/kierun sketches I had from previous paintings (4 of wands, and sagittarius), using them just as rough shapes to get the concept here; refining and changing them later for the final form. 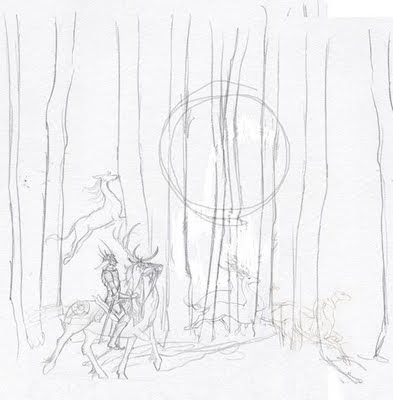 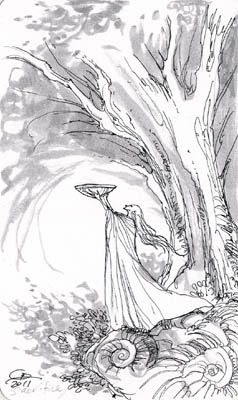 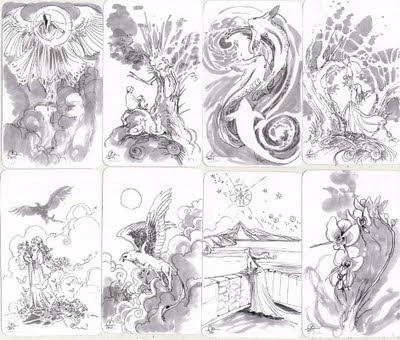 Posted by Stephanie Pui-Mun Law at 11:10 PM No comments: 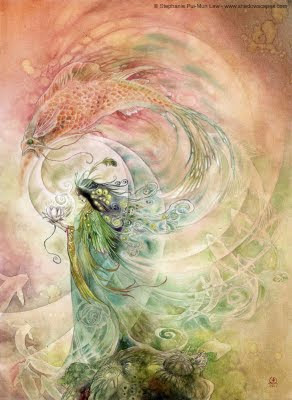 Inspired by an ancient Chinese fairytale - the story of Yeh-Shen. This tale is a variant of our more familiar Cinderella story. Yeh-Shen's dead mother's spirit lives on in a golden carp who befriends the lonely girl. When Yeh-Shen's jealous step-mother discovers this source of happiness, she kills the fish, and serves it for dinner for herself and her daughter.

But the spirit is not so easily banished. When Yeh-Shen's step-mother and sister head off to the spring festival, her mother's dead spirit visits and tells her where she might find buried and hidden a beautiful gown of kingfisher feathers and golden shoes to wear to the festival.
Posted by Stephanie Pui-Mun Law at 12:02 AM 5 comments: