An afternoon at the Ashkenaz 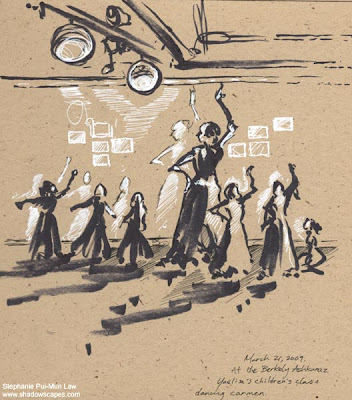 I get up this morning to head out with Bern and her 5 year old daughter Iliyana to Berkeley for some flamenco classes. I'm a little anxious as I've not been to any classes in a while. Bern and I mostly just do our own thing. But it's good to be injected with new inspiration now and then to get creative juices going. For that matter, same goes for figure drawing classes even when it comes to visual art.

Iliyana is in the children's class for the first hour. We have to wait our turn for the class that follows. We sit and watch at the sidelines among the parents, some of whom are enchanted by their little ones capering to the music of Carmen, others who seem a bit on the bored side, reading a novel or squinting at some paperwork. After a while, I pull out my sketchbook.
No pencil cheating I've decided now. Time to push further where I've already started the other day by using the less controlled brush pen instead of the usual minute points. It's how I used to do sketches in these books but somewhere along the line I lost my nerve and got too concerned with making it "look good" and started doing (very quick, but still) pencils first before laying the ink on top. As I was waiting for Bern to call and let me know she was here to pick me up this morning, I deliberatey did not pack a pencil into my bag.
Like not having been to a dance class for a while, touching black ink to a page without some guiding pencil lines can be a bit unsettling. Ink is so permanent. Each stroke has to be done decisively, with a purpose and a reason; knowing that once it has been laid down, it's there. Deal with it.
I watch the little hands stretch to the ceiling and curl in fleures. A dozen miniature black skirts twirl across the floor, following Yaelisa's graceful form. Iliyana turns hesitantly to look at us a few times, being the youngest and smallest in the class. Bern smiles encouragement at her. I touch black ink to the page. 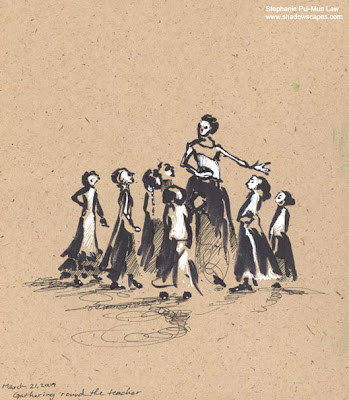 gathered around to talk about abanicos 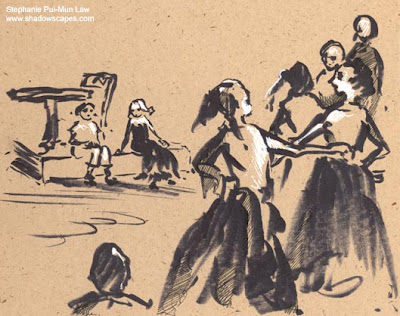 the older students dance some tangos while the two new ones sit back and watch
Posted by Stephanie Pui-Mun Law at 11:00 PM