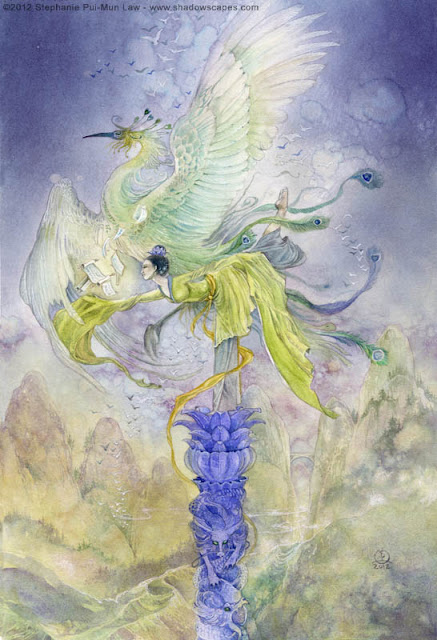 Basis for this one is Chinese classical court dance. According to Satyr:
The image is drawn from the tale of the esteemed poet Shangguan Wan’er, who judged two of her fellow poets from the top of a tower in order to find the one who best captured the essence of the coming night. “No need to worry that the bright moon will fade,” said the wining poem; “the pearl of night is soon to arrive.”


Some of the initial sketches. 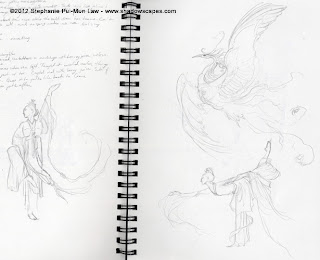 Couldn't decide between the two poses at first, so I tried them both out. 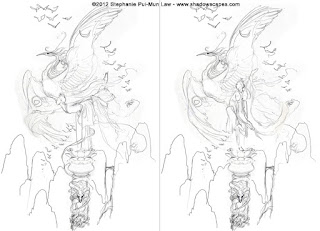 Settled on the left image. Refined and transferred the sketch to the illustration board. 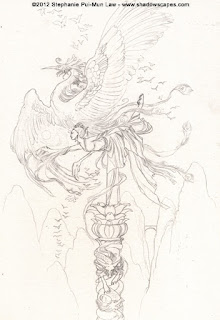 Color rough digitally, to get some of the basic tones and a general concept for the colors of the piece. 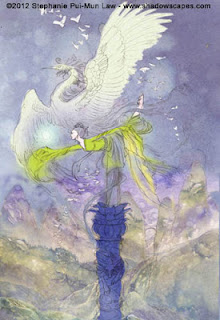 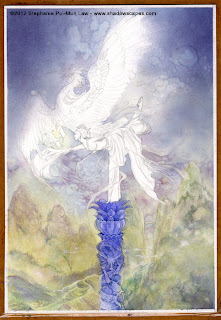 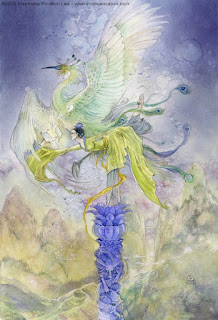 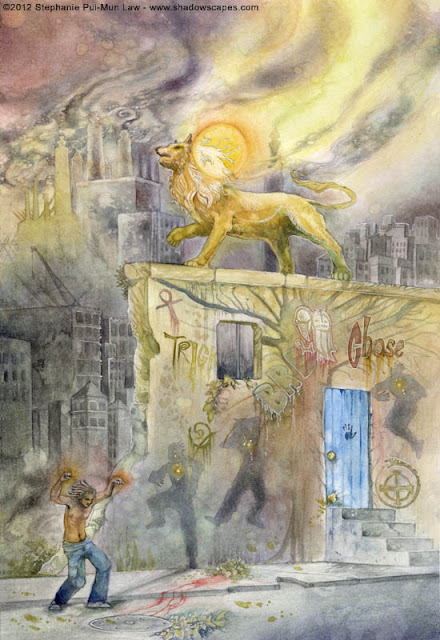 Basis for this card is krump.  Started with watching lots of krump dance videos on youtube. Freeze-frame sometimes to try to capture certain poses. Did a series of quick gesture drawings to get the feel of the body and the movements of the dance. 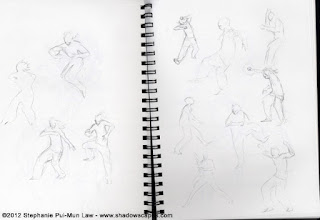 The other aspect of this piece was the lion that would be on top of the wall. Again, a few quick sketches. Also some thumbnails for the composition. 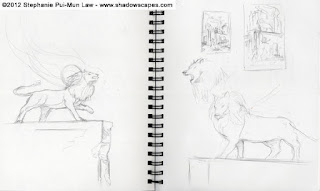 Got the idea to have dancing shadows along the wall.Tried a few of those. Another version with the main figure just walking, along and the only the shadows dancing. Not active enough for Defiance though. 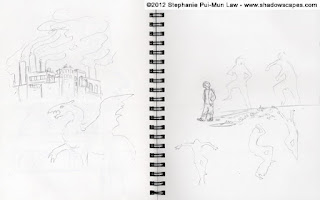 All the pieces came together. I scanned all the sketches, then played around with the position of everything in photoshop. Enlarged some pieces, shrunk others, moved the shadows around on the wall. 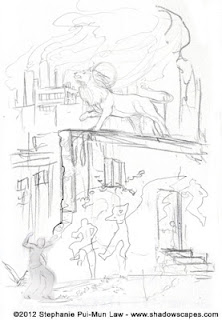 Finalized sketch on the board. 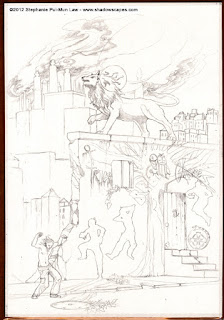 Did a rough color thumbnail, as I described in my previous post about Joy. Bright sky blue door to really pop out from all the other colors. 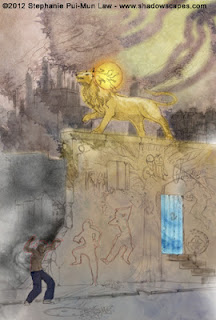 In progress painting shot. Worked from the background to the foreground. Started with the lion, because that was the easiest part of this piece for me. The grungy darkness comes hard for me! 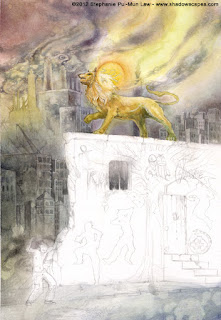 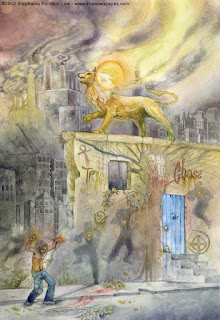 It has been requested, so I'm going back through these last six pieces and posting the in-progress sketches and phases. First up, Joy. 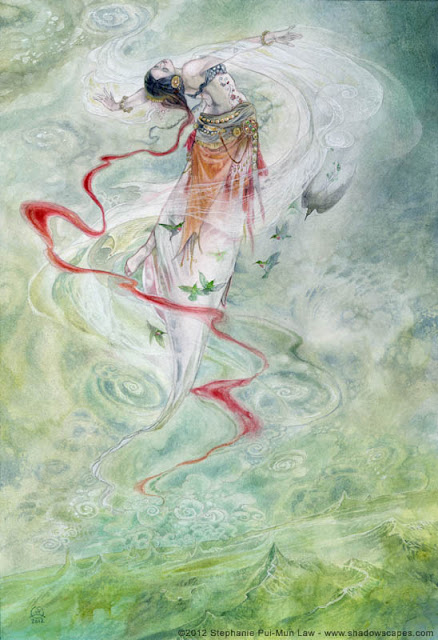 Each of the cards for the Dreamdance will be based on a dance form. For this one it is a veil bellydance.

The very first sketch. I liked the flow of it, but was not initially happy with it. Funny enough, it ended up being the winner, with a few tweaks. 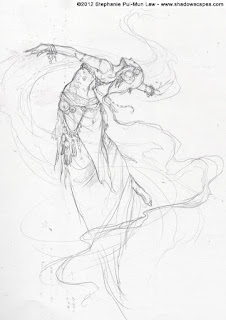 Tried scribbling a few random thumbnails to get some concept for a composition. Liked the figure on the lower right, so tried expanding on that one. 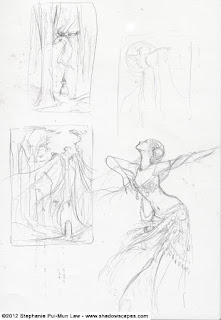 Attempted to see where that one would take me. I liked where it went, but it didn't fit into the framework of "Joy". Set it aside for possible future painting. But not what is needed here and now. 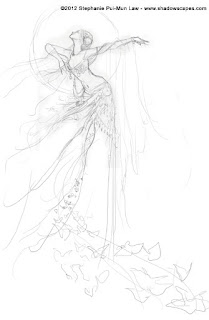 Went back to the first sketch. Didn't like something about the head position, so tried resketching it with a slightly different angle for the head. Ding! That was it! 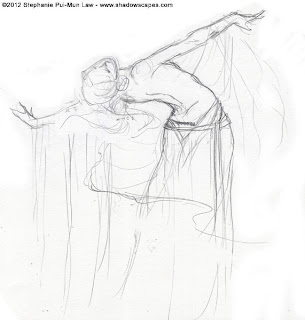 Fleshed out the rest of the composition. Wanted the "veil" to be wispy clouds and wind, as she's so high up. Satyr was worried initially after seeing this sketch that it might look like smoke swirling up from fires down below. But I had colors vaguely in mind for it already and didn't think that would be a problem. Set the horizon at a wild tilt, for a less static background. 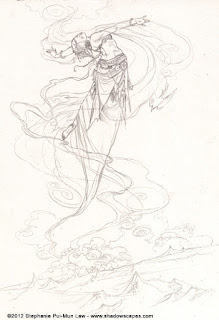 ...because it would be bright green! So, I tried something a little different here than usual, technique-wise. I knew I wanted a green-ish tint to it all. But it's a delicate balance if making the whole sky greenish too, not to take on a sickly hue. I wanted some bright spots of red as well. And, personal taste, I generally try to stay away from circling the whole color wheel. As in, I like to try to stay within a 2/3rds section of the color wheel, to avoid a rainbow look. Contrasting colors also good. But if I wanted red and green, I didn't want blue. So I took the sketch into photoshop to try to see what I could do about striking that balance.

In the past, I've just scribbled in photoshop brushes to give myself a rough idea of colors. But it's hard to get a real good idea of what that looks like for watercolor, because I can't get the color shifts and irregularities. So instead of just painting directly, I took a big section of sky from one of my other paintings (I think it was Wind Machine) and pasted it into a separate "multiply" layer. Then I fiddled with the color balance of various selections on that layer, until I was satisfied with the overall color scheme. 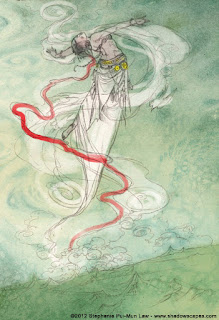 I used that photoshopped thumbnail as a guideline for my colors as I started to paint. 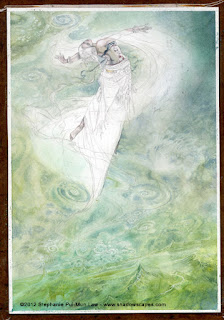 Turned out, it worked fairly well in helping me press to some color subtleties and interactions I otherwise would not have done! 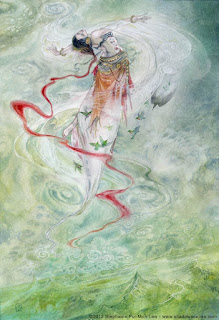 In-progress shots of the other 5 pieces will be coming in the next week!

So here it is at last. I've shown some previews of this project, but I wanted to wait until it was a little bit further along before revealing it. The Dreamdance Oracle is a work-in-progress oracle deck collaboration between me and writer Satyros Phil Brucato. Our intention at this time, is that it will eventually be made into a Kickstarter project to fund a limited run, high quality, special edition deck; and then at a later date released in a more standardized mass-market form via a card publisher. Since the project is still in its early stages, this is not set in stone yet.  We're still discussing options and possibilities, so suggestions are welcome!

While I am very happy with the deck that Llewellyn produced for me with the Shadowscapes Tarot, I know a lot of people wanted a larger deck size. That's part of the reason Satyr and I want to create a special edition this time, where we have complete control over things like that!

The first 6 cards are now viewable on the site.  I'll be updating it as they are created and adding them to the site, and it will probably take about a year for completion of the full deck. The final deck size will consist of 40 cards. 10 cards to each suit: Passions, Places, Partners, and Passages.

Blues! And another preview!

Another preview for this new project.  I'll be unveiling it officially sometime in this next month, so stay tuned! This pinterest board gives you a clue to some of the inspiration I'm using. 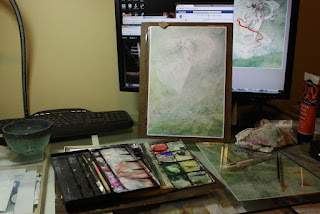 I very rarely do this. Usually I have some idea of the color scheme when I do a sketch. The colors and mood of a piece are tied into the concept for me most of the time. But for this particular one I was really stuck on the colors, so after scanning in the sketch, I reduced it to a thumbnail size, and tried a few options in photoshop. After settling onto this green/blue palette, I'm starting the painting, loosely following the color choices I decided on digitally. 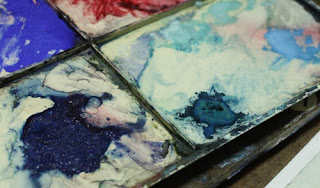 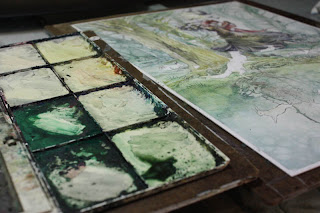 My mess of a palette. When I do tutorials I try to stick to the basic-straight-from-the-tube colors for ease of explanations. But really I rarely use the colors straight. My palette's a big mixture of everything. I hardly ever clean it out unless I need a bright and vibrant red or yellow. Then I'll wipe down a portion. Otherwise I like to have all the bits of color that gather in the corners to pick from when mixing!

Also in this photo you can get a sneak peak of a secret (for now) project I've got in the works. Collaborating with a writer friend, Phil Brucato.
Posted by Stephanie Pui-Mun Law at 11:40 AM 3 comments: