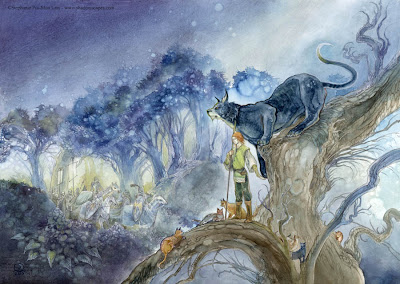 As told in Llyfr Gwyn Rhydderch (or the Mabinogion), a collection of Welsh legends:

At the Black Stone in Llanfair in Arfon, the great sow Henwen gave birth to a kitten (after having previously birthed a wolf-cub and an eagle). Coll mab Collfrewy was the swineherd, and when he picked up this ferocious little kitten, ball of scratching and fur and claws, and Coll hurled it into the sea to drown.

The kitten clung to life as fiercely as it had clawed at Coll, and managed to survive and swim to shore at Anglesey, where it was discovered and raised by the sons of Palug. (Hence the name Cath Palug, "Palug's Cat", although it is sometimes thought to be translated as "clawing cat" as well.)

It is said that this Cath Palug grew to become an enormous beast who terrorized the surrounding lands. When word came of the ravages, King Arthur sent his knight Sir Cai to dispatch the giant cat. Nine-score warriors and champions rode alongside Cai...and none of them returned, save Cai. How the confrontation went - whether Cai slew Cath Palug, or simply fled...the poems and stories do not say.