Foxes of the Past

On the heels of this most recent painting (A Dream of Grace), I was asked by a few people about my past pieces on a similar theme. The older pieces I had retired from my website, but I thought I'd post them here to satisfy the curiosity for those who have never seen them.

As time passes, I find myself occasionally wanting to revisit concepts I've explored in the past. With a new perspective or twist, a new eye, and (hopefully) better skills. One hopes that it can go beyond simple rehashing of the same tired images, and instead approach a subject with more visual eloquence granted by the passage of time and experience.

True Reflections (2009) was my most recent foray with fox spirits. This was a piece I did for Dreamscapes, Myth & Magic in a chapter dedicated to exploring trickster archetypes. Foxes and fox spirits fit into this segment quite naturally. The piece itself was kept more basic in composition, and I had to rein in my tendencies to elaborate too much, due to the restraints of having to make the painting something that would fit into a step-by-step format. 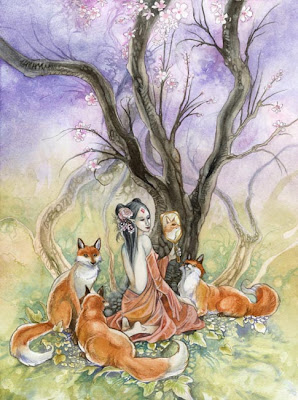 Kitsune (2001). Quite a jump back! I did this piece for my friend Sylvia Leung's web-comic, Wish3, based on her character Himitsu - fox spirit, friend, guardian, guide. Anatomy ( both for the girl and the foxes) was clunky, And my color palette was a bit less refined at the time. I liked really vibrant, distinct shapes. Partly that was due to the fact that I was still doing a whole lot of digital painting as well, and the in-your-face colors of painting on a screen with light pixels was how I tried to paint with watercolors as well. I like to think that I've since developed more subtlety, and learned to appreciate watercolors more for themselves, while keeping a really glowing and vibrant palette. 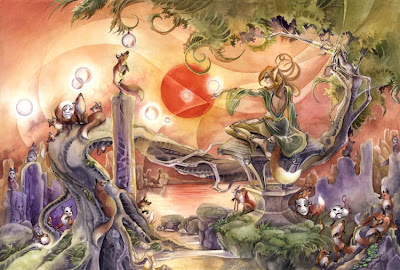 Lady of the Gingkos (2002). I'd recently come back from a sojourn in Japan. It was autumn, and the trees were glorious cathedrals of living light - fiery orange and emerald maple foliage, and carpets of golden gingko leaves. In Kyoto I visited a temple of Inari (to whom foxes are sacred, and whose temples are often guarded by two white foxes). A tunnel of crimson torii gates stretched up the mountainside, flanked by a bamboo forest. In the dimness along the path, with the eerie whisper of the swaying bamboo, there were occasional fox statues. The image of that place formed the inspiration for this piece. 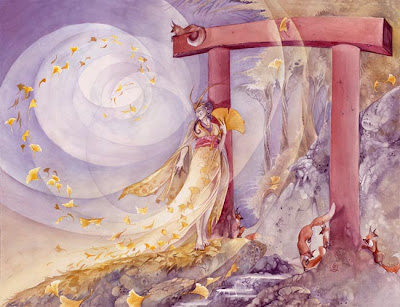 A Dream of Grace was an attempt to go back to this image that I had in my mind. My own "dream of grace" perhaps. Trying to approach and capture the feeling of mystery and wonder that I had in me at times during that trip. As a result, the new painting does have a similar color scheme, and there are familiar elements, like the swirl of gingko leaves, and the fox-spirit-maiden has an echo of the pose from this original piece. 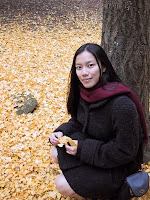 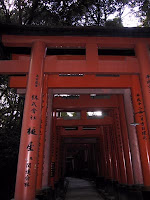 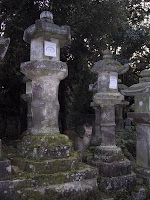 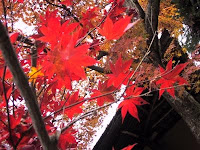 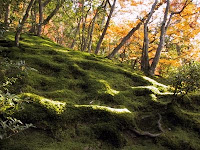 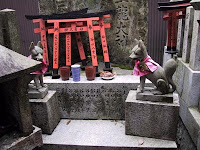