Out for an evening with the ladies. A few of the dancers I used to perform with at La Taza de Cafe met up at local cabaret lounge, Yoshi's. We went to see LoCura, an Oakland band with a mixture of Latin/Reggae/Flamenco.
I'm on a roll with getting some drawings in my travel sketchbook. Second time I've had a chance to do so in the past year. Danced a bit, and got to do a few scribblings in between when sitting down for breaks.
Yoshi's is a neat venue. Never actually been there before, even though I live 15 minutes away. Japanese restaurant in half of it, and the other part is a cabaret theater where they feature Jazz, and occasional other live entertainment. 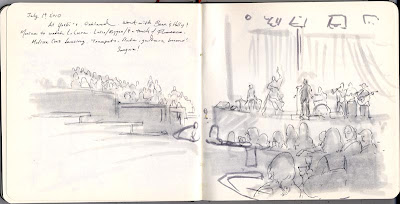 This was an interesting tableau: as Melissa was introduced and stepped out to do a flamenco solo sans music, the band retreated off to the side. They clustered off at the edge, as engrossed as we the audience were with the delicate/powerful performance. 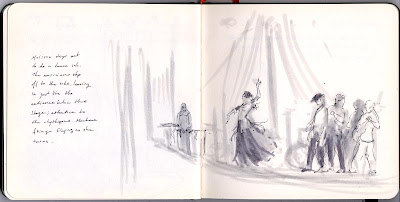 For the first few songs the open dance area below the stage was empty and silent, but by the end of the set it seemed that at least half the audience was down there dancing while the flamenco dancer spun up above them(us) on the stage. 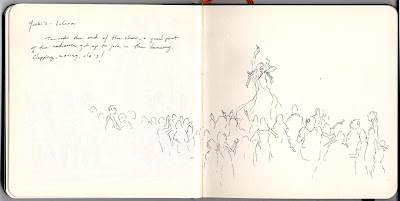