As usual I had a blast at Dragoncon. It's always one of my favorite events of the year. The costumes are so much fun to watch, everyone's excited and friendly; and being at the tail end of the convention season means that for all the exhibitors and artists it's a party time as well! I love the chance to meet all my fans and get warm fuzzies from hearing what my art means to them, and also the chance to gabber with like-minds of artist friends. Had a good time hanging around with the ladies of Le Salon des Fantastiques, and my roomies for the show Ruth Thompson and Sandra Santara.
I love visiting the art show as well and getting such inspiration and motivation after viewing the originals of such amazing artists like Donato Giancola, Todd Lockwodd, and Don Maitz. viewing artwork online or in books is never the same as getting up close to the real paintings!

I had a bizarre "small world" moment when I found myself at a group dinner on Sunday sitting across from an artist I had not met before. We introduced ourselves, and it turned out he was a software engineer once upon a time as well. That seems to be pretty rare, I've never yet met another software engineer->artist. Plenty of webdesigners and things, but no one else who ever really dug into programming guts like I used to. Well turned out Marc Scheff used to work for the main competitor of my old Plumtree Software, during that same dot-com boom era.

This year instead of the usual costume-watching at the Hyatt on Saturday evening, I went to the Georgia Aquarium, which was open until 11PM specifically for Dragoncon. It actually turned out to be quite a special experience, especially once the main crowds began to die down and we were among the last few stragglers who could stand in front of the enormous tanks almost alone.
Some sketches from the weekend:

Sunday night, hanging out in the Hyatt bar after dinner at Max Lager's with a huge group of artists. 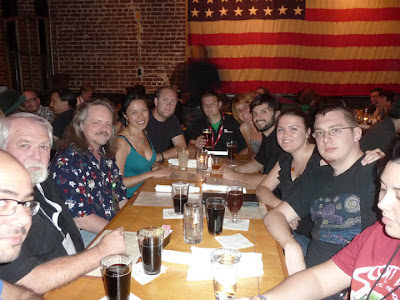 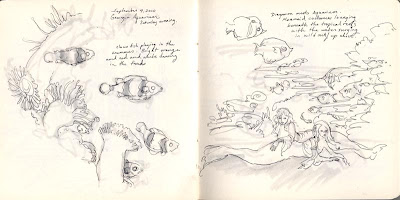 One of the particularly fun things were all the themed costumes. Mermaids lounging in front of the tropical reefs. Ursula the Sea Witch being friendly with the sharks. Jellyfish bobbing over the heads of the crowds. 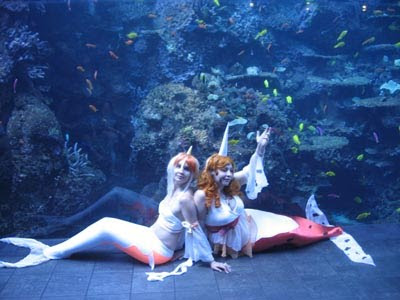 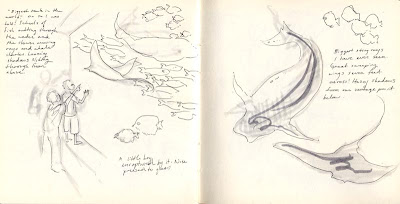 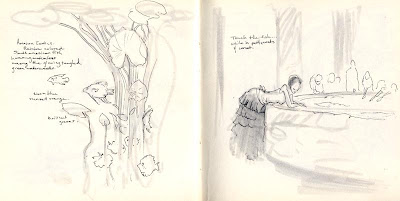 My companion artist (Tiina Purin) for the evening, sketching as well. 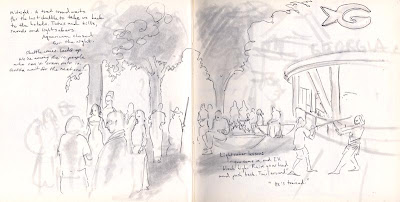 As the night wound down. We were among the last stragglers to leave. 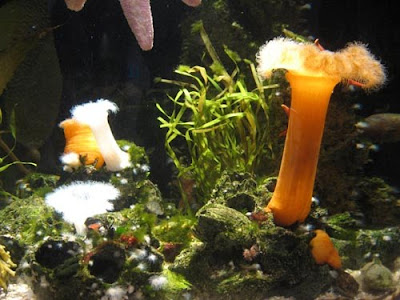 Posted by Stephanie Pui-Mun Law at 7:30 AM