For an upcoming Realms of Fantasy issue, an illustration for a story "Sultana Lena's Gift".

After reading the story, my copy of The Rubaiyat of Omar Khayyam came to mind, with its lovely illustrations by Edward Dulac. Browsed through it for inspiration and to get my mind flowing in the right direction for the imagery.

Also key in this particular short story is a little mechanical bird. I started with some scribbles in my spare time while at Gencon a few months ago, exploring some ideas for the bird's design in a few ink drawings. 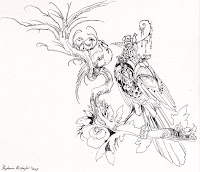 And now that the zodiac is done (with its more urgent deadline), a few months later I'm finally having the chance to go back to this project. The final rough concept sketch for the painting: 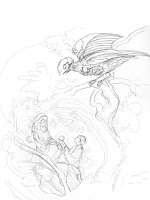 Stamp of Art Director approval on it, and so all set to move on to a much more detailed sketch and the painting! I love doing work for Realms of Fantasy, as the art director (the old one, and my so far very short acquaintance with the new one) seem to send fitting stories my way. From there, I read the story and pretty much can paint anything I want. 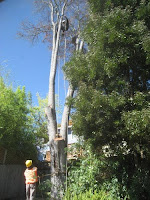 Meanwhile, it's been rather noisy outside my studio window today as I said goodbye to a 50 foot tall black acacia tree in my backyard. Unfortunately it has suffered from root rot after the previous owner of the house put in extensive landscaping terraces in the backyard just before selling it to us. It's taken two years for the results to be evident but a few months ago Dana and I had to reluctantly admit that the tree was dead and would need to be taken down. It'll be sad to see that large gap in the sky where it used to be. Even mostly dead and only as bare branches it had a stark grace and was nice to shield us from the neighbors.

I'm sure some something will quickly grow in that space though. If the black acacias in the yard had their way, this whole plot of land would be an acacia grove, from all the saplings I'm constantly finding popping up in awkward spots. 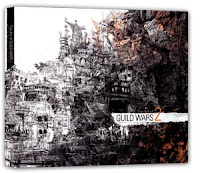 Also, a new art book to add to my bookshelf arrived in the mail today. I've never actually played guild wars, but after seeing some of the artwork in this shown on other blogs, I ordered one. It features all digital artwork, but I find often that some of the art that I enjoy looking at the most is that which is most different from my own.
Posted by Stephanie Pui-Mun Law at 1:39 PM