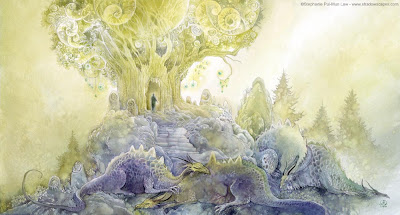 While they sleep the seasons turn.
The leaves burst green then burn gold
and fall to crisp upon the ground.
The sun sings of how she yearns
to sleep in the dusky hours
when damp night mists
swallow all sound.

While they sleep men tread upon
the worn pathways along the plated spines,
weaving tales of what has gone,
piping tunes of what has been,
and what will be -
The cadences rise and fall
and drift between the scales and shifting seams;
melodies for sleeping giants' dreams.

When I showed Dana the sketch for this piece, his comment was, "You paint that tableau a lot." He said it was as if I had seen this place once upon a dream and now it continually tried to push through my subconscious onto the paper. As if I struggled over and over to capture the essence of this vision I had glimpsed.

In a way, isn't that what all artists do? Isn't it always the goal to somehow capture onto paper an elusive spark of an idea? It might be inspired by something very tangible and real as recording the lines of the body of a live model; or as fleetingly obtuse as the conveyance of a concept - a smell, a color, a glint of light, a phrase. Whatever the source, once internalized it takes on the presence of a dream. It becomes its own being within the interpretations and confines of the mind. It is this transmuted version that wants to make its way to the paper, demanding Existence!

By that definition then though I may not have seen this scene in my sleeping dreams, nor visited it in another life, I have created a waking dream. And from that source springs this flow of inspiration that demands to be given a pulse and a breath and a voice.

* * *
At first I thought Dana meant the fantastical Tree; but though I do paint those quite often I realized on reflection that he actually meant more specifically the sleeping dragons coiled along the earth's lifelines with their spines writhing upon the crenellated hillsides. Some previous incarnations of this concept, starting from 1999 with "Otherworld" - which coincidentally has very similar colors to this latest piece of green, gold, and violet: