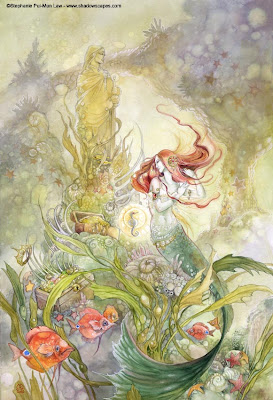 Her Garden
Size: 10.25x15 inches
Medium: Watercolors
Detail views -here-
Prints -here-
---From Hans Christian Andersen: The Little Mermaid:
"She was a strange child, quiet and thoughtful; and while her sisters would be delighted with the wonderful things which they obtained from the wrecks of vessels, she cared for nothing but her pretty red flowers, like the sun, excepting a beautiful marble statue. It was the representation of a handsome boy, carved out of pure white stone, which had fallen to the bottom of the sea from a wreck. She planted by the statue a rose-colored weeping willow. It grew splendidly, and very soon hung its fresh branches over the statue, almost down to the blue sands. The shadow had a violet tint, and waved to and fro like the branches; it seemed as if the crown of the tree and the root were at play, and trying to kiss each other. Nothing gave her so much pleasure as to hear about the world above the sea. She made her old grandmother tell her all she knew of the ships and of the towns, the people and the animals. To her it seemed most wonderful and beautiful to hear that the flowers of the land should have fragrance, and not those below the sea; that the trees of the forest should be green; and that the fishes among the trees could sing so sweetly, that it was quite a pleasure to hear them. Her grandmother called the little birds fishes, or she would not have understood her; for she had never seen birds."
* * *
Some of the in progress shots:

Client specified she wanted red hair and a green tail. So with that edict in mind, I planned the colors of the background accordingly. The red and green would be very striking, and as they are complimentary colors already, I couldn't just make the background the complimentary color of one or the other as I frequently like to do in order to push a foreground element to the viewer's attention.

Instead I had to pick colors and tones that would really offset both red and green. So I chose to use a pale golden light, with the distant sea arches fading to purples. The starfish were little bits of red to tie that color in throughout the piece. And initially I planned to make the fish bright yellow. But when I got to that point (the 4th in-progress scan you see below) it felt like the starfish weren't enough to offset her red hair, and I needed something else. So they became bright red fish, which nicely pulls the whole composition together.

And if you missed it, the evolution of the sketch is -here-.

I used to be a Winsor & Newton girl for my paints. I've used them for over ten years. But ever since my friend Sophie Klesen gave me a few little sampler containers of Kremer Pigments to try out, I've been in love.

A lot of the colors are non-standard and unique, so I don't use them in my technique books because it would be too complicated for people trying to reproduce the results with the standard array of colors. But for most of my work these days now I'm moving more and more towards exclusively using the Kremer colors.

The amazing thing is how wide an spectrum of tones and shades can be achieved with very few actual distinct colors. I only possess 6 colors - a red, orange, yellow, green, blue, purple. And yet I feel like with those six I have been able to get a much broader array and subtle shifting shades than I could ever achieve with my enormous selection of W&N paints.
Posted by Stephanie Pui-Mun Law at 10:27 AM