The evolution of a sketch for a commission. The Little Mermaid, in her underwater garden with the statue of the Prince.

The initial sketch, with the Mermaid thinking dreamily of the Prince. Had a kind of wistful look to her I thought, which I quite liked, but the client didn't. Might eventually use the figure for another painting of something else one day. 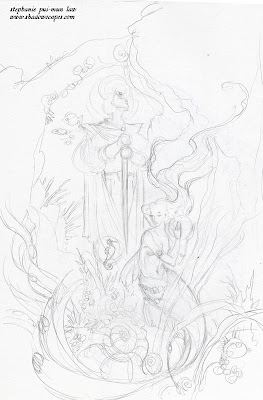 A revised sketch for the Prince's statue. 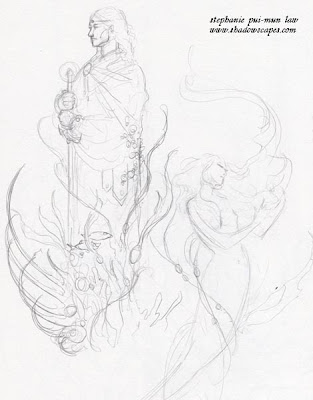 Tried a few more different poses for the Mermaid. Client wanted the Mermaid to be vainly combing her hair. I liked this pose, but the composition didn't really move me. It felt too bland and safe. As I pointed out in a previous entry, Dulac's composition on his Little Mermaid piece really appealed to me. I wasn't going to be able to accomplish something quite that dramatic for this, within the guidelines that I was working. But I could at least spice it up a bit more than this sketch. I also wanted to work in that large spiral shell I had in the first sketch (I have an affinity for spirals in case you haven't noticed). 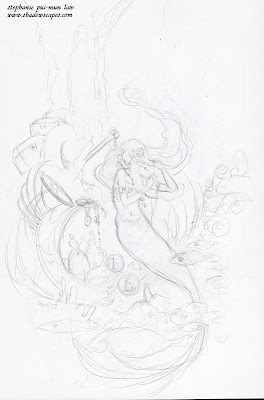 So I scribbled another one. I liked the array of objects/seaweed/fish in this, but after staring at it for a while I realized that the pose was far too similar to my Page of Cups painting, and I really hate to repeat myself. 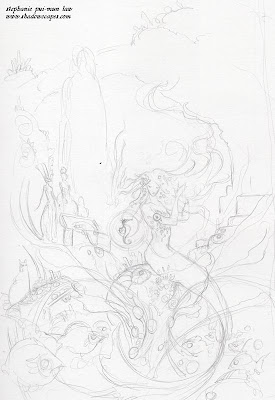 Here's where photoshop comes in oh-so-handy! I snagged the Prince sketch, flipped horizontally, and resized him a bit to fit into the background. Took the mermaid pose from the one I like best and stuck her in the more interesting composition. I then sent this collaged version to the client. 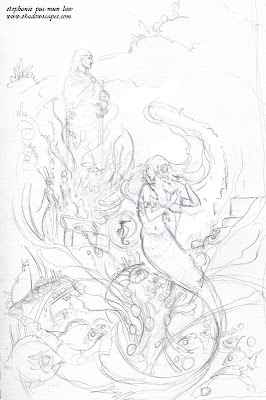 A few more tweaks were made, and then it was transferred to the illustration board for the cleaned up final sketch. Details were added to the surroundings, treasures, adornments.
Now it's ready to be painted: 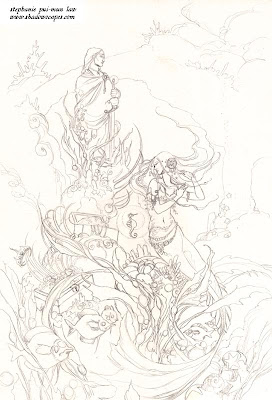