The Queen of Spades Sends Her Regards 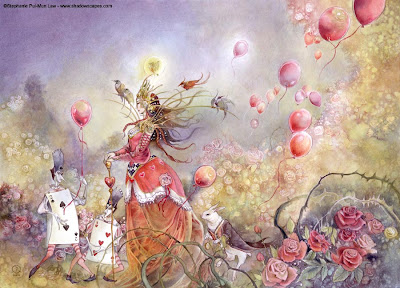 "The Queen of Spades Sends Her Regards"
Size: 11x16 inches
Medium: Watercolor
Prints & Original available -here-
Detail views -here-
Whew! That title is a mouthful. I seem to have a habit of long titles. This piece inspired of course by Lewis Carroll's "Alice in Wonderland". It's a wonder I've made it this long without doing something derived from that. For that matter, I was surprised to find I had not even read "Through the Looking Glass" yet until recently. I had a copy of it, and somehow just always thought I had read it.
-This- seemed too fun of a concept to pass up. Balloons! Alice! Why not??
It sparked an idea almost instantly that I scribbled a thumbnail of in my sketchbook: 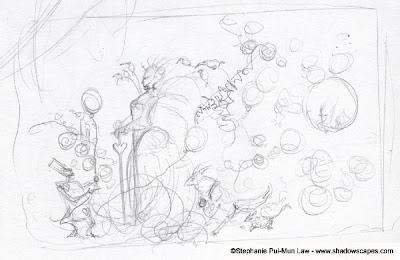 From the thumbnail I did more detailed and refined sketches of the figures.

"The Queen of Spades sends her regards," I thought as I drew the two Cards. That sent my mind meandering along a Carrollian nonesense spiral of speculation about what exactly IS the hierarchy of the various Queens and Kings in Wonderland?? They are a deck of cards, but there is only ever the Queen and King of Hearts in the book. The suits of the lower echelons seem indicative of their position in court (hearts being the children of the Queen, spades being the soldiers...etc). But then what of the Queen of Spades? And the Queen of Diamonds? Who might these mysterious Others be? Perhaps they are lesser queens to the Queen of Hearts? Or rivals? 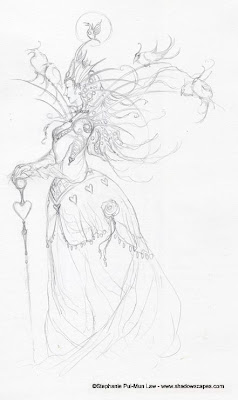 After some scanning in and tweaking things around in photoshop to combine the various sketches, it resulted in this, prepped for painting on the illustration board: At first I had in mind blue/gold color scheme.

Not thrilled with it, but kept working, hoping the colors would resolve...

After getting the red roses in, I realized I didn't like the color scheme. Hated it in fact. It felt too much "grass is supposed to be green, roses are red, sky is blue," rather than having any kind of mood to it. I think because in the early part it looked like it was going to have a blue/gold scheme to it, with bright red poking through. But the blue/gold somehow melded into greens. And then I was getting a rainbow effect.

I run into this phase often in paintings (The "I hate this painting!" phase). It's the hard part. People often ask me, "Do you mess up?" Answer is yes, but I don't toss a painting out if I feel it's been messed up (though I was tempted at this point because it was annoying me that much). I keep working at it and layering different shades in. Sometimes lifting colors out if I have to.
So I took a wide flat brush and started swiping in light washes of purple into the sky.

Not quite there yet...

More aggressive with the layering. Added red to it (since red on top of the blue that was already there would turn purple) and brushed yellow on top of some of the blue bits closer in the shrubbery to turn those into green. The extra glazes also had the effect of softening up some of the background foliage and making it all look kinda misty-dreamy.

More yellow to turn the last blue bits in the rose bushes into weird purple and green shades. And I was finally happy with the colors at this point, and glad that I had not given up on it!