After the initial sketch, I start with the background of the piece. I start with a Lemon Yellow glow around the butterflies, and work my way outwards from there to lay in very light washes of mixtures of blues/purples.

In order to keep the yellow glows from just turning into sickly green tones, the purples are kind of used as a buffer zone between the two. Because I'm working in such thin and gradual glazes, you don't really notice the purple so much, and the transition from the yellow light to the blue skies is even and smooth.

I work my way into the details of the background foliage now.

The general color scheme that I have in mind is for most of this to be an almost monochrome golden tone, with the blue of the sky offsetting that. I don't plan the colors too much, but I have some vague ideas in mind. Sometimes if a client insists, I'll do a very quick color study in photoshop; or if I run into indecision and can't choose between two options on a personal piece. Most of the time I just pick colors and run with it, letting each choice dictate what comes next in a sort of natural progression.

The more distant foliage becomes darker shadowy blue/purples - darker versions of the sky. As I approach the foreground, the leaves are more Lemon Yellow, Cadmium Yellow, and Naples Yellow. Filling in the shadows first, then lifting out bits of highlights. Leaving random watermark textures in some places without overworking them. 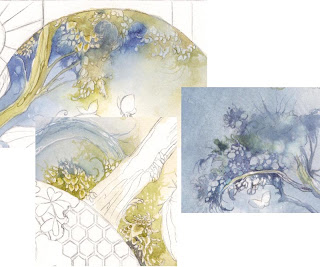 Continuing towards the foreground. Next up is the lower wall area. I can't finish the winding branches in those areas without painting the walls a bit first since, some of the branches twine around in front.

Again, most mixtures of yellows, with shadows of blues, violets and Payne's Grey. Mostly the same shades as what I had thus far been using for the foliage. On the upper walls laying in a base coat as well, but having yet worked the details up into that part yet.

Throwing in some salt for texture along the walls. Keeping the areas around the wings of the twins brighter. More Lemon Yellow there, to have a nice glow, while the shadows fade to Raw Umbers and purples.
Haven't yet decided what color the butterflies will be, or for that matter, the wings on the twins. But starting to get some ideas at this point. Maybe a bright warmer yellow, or even orange for some contrast. Don't want to stray too much from the almost-monochrome look, but want a bit of sparkle and attention grabbing, since the butterflies really provide a lot of motion in this composition. Birds and winged things are great for that.

Finally getting to the main foreground.

Pale, gold-ish skin. Underlayer of shadows with purples. Overlaying that with Naples Yellow, mixed with opaque white, and a touch of Alizarin Crimson. Not enough to make them rosy, but just enough to differentiate their skin tones a bit from the walls they are perched on. 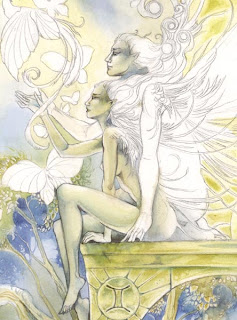 Enough for one day. Finishing up (maybe?) tomorrow!