A Morning at Golden Gate Park

Set off this morning for Golden Gate Park in San Francisco. Tried to make it early as it is Saturday, and as soon as the sun peeks out from behind the ever-present clouds in the sunset district, the park rapidly becomes very busy. When I got there the roads were still empty, and the only company I had were the hordes of early joggers making their rounds along the paths.

My brother and his wife were meeting me around noon to see the King Tutankhamun exhibit that is showing at the De Young Museum. Which left me a couple of hours of prowling the park on my own. I'd been wanting to take my sketchbook out there for a while, so it was a perfect opportunity.

It was misty when I arrived. The not-too-distant hills were half-obscured by the low-lying clouds, with only a few taller trees peeking out above the gray haze. A bit of damp to the air as well. Somewhere up above I heard a hawk screaming, and when I looked up I saw it glide through the air above my head to perch on a nearby branch. I watched it for a while, and it watched some distant bird. And then I blinked, and it was gone.

The plaza near the museum and the Academy of Sciences had clusters of early morning Tai-Chi practitioners greeting the day. And beyond them by the fountains the artists were setting up their booths for anticipated Saturday park-goers. 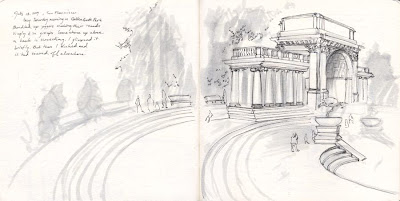 The sound of drumming drew me near the stage, where a small knot of people were gathered. Turned out to be a Chinese lion dancing class.

A great chance to do some gesture drawing, recording the mental impressions of constantly moving poses. Lion dancers were perfect for this, as their movements are very striking, and though it can be fluid, there is also that feeling of each motion being frozen for a split second before moving on to the next series of actions. Something one of my flamenco teachers once said about dancing was to try and think about each accented movement as being for a snapshot photo. That's what these lion dancers were like too. Stalking prowling steps - snap. Rearing up to roar - snap. Stretch out low - snap.

Time had passed rather quickly, and it was approaching noon. Made my way over to our meeting spot, and settled down at the sculpture garden outside the museum.

Unfortunately didn't get a chance to do much sketching once we were inside the exhibit, as the crowds and dim lighting were not so conductive to drawing. "Well what did you expect?" Dana snorted when I commented upon returning home about the crowds. "King Tut's the Sting of Ancient Egypt. Everyone's heard of him!!!"
Posted by Stephanie Pui-Mun Law at 5:35 PM