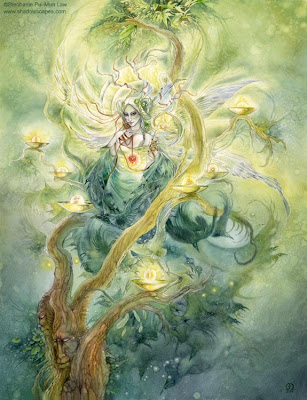 
The Green Faerie lurks;
she hides in a dream -
her voice slips between
in and out of life's seams.
She hovers in edges
of shadows and light;
she beckons from doorways
and revels in night.

The Green Faerie asks,
"What do you desire
with deepest heart's longing
and soul-burning fire?"
She smiles as she offers
a spidery thin hand
and a cup: brim-filled
brew from her distant Green land.

The Green Faerie tempts,
"Just one sip. Just one taste!"
Knowing full well
with what dusts its been laced:
honey sweet brew
that hides in a dream
to slips down between
in and out of life's seams.

Some "in progress" shots of this painting as I went:

It started with Amy Brown asking if I'd like to join her and Jessica Galbreth for their monthly "Enchanted Visions" project, where they would pick a title and then go off and see what they'd each come up with. I'd expressed interest in joining them, since it sounded like fun. So June was "The Green Faery".

The little poem came to me one night before falling asleep, even before the image. What other things did that title conjure up in my head? Thoughts of absinthe (a tincture of wormwood), which is sometimes called "la fée verte" and was a popular spirit for writers and artists to partake of in the late 19th and early 20th centuries. They claimed a dark inspiriation when in its grips, tied to a strange clarity of vision. 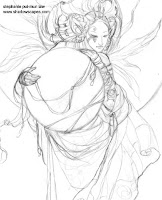 Dug up a sketch that I had done nearly 3 years ago. I always liked her, but just couldn't figure out who she was. Decided to try and play with it and see what I could do. She needed some revisions though...she looked too gentle, most definitely not a lurker, or a creature of shadows. And I knew I wanted eye contact. Deep green eyes to entice. And the orb, not quite fitting either. So with those revisions in mind, the second sketch. But that just seemed to completely lose all of which I liked about the initial drawing. Erased. Stared at it in frustration. Tossed it. Grabbed it back and scribbled more, erased more. Finally put that one aside as a lost cause, and tried again. I liked the result this time.

Next comes thumbnails for the composition. This came fairly quickly after the difficulties of the initial figure's sketch, which was a relief. 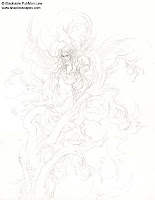 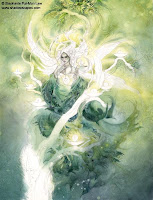 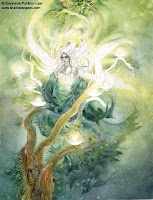 As did the rest of the painting.
Seeing as this is a personal piece, it's a change of pace from commissioned paintings because I can be more unplanned about aspects of it (composition and color) and can just let myself be guided by whatever impulse takes me. The explosion of her skirt into a flock of birds was particularly fun, as I was able to just let the irregularities of the paint texture dictate how my imagination would form the flock.
Also, since this is not a Dreamscapes piece, I'm free to use my less standard pigments , i.e. my new paints from Kremer!

Told you I was stuck on greens though....
Posted by Stephanie Pui-Mun Law at 9:17 AM