Thomas the Rhymer. He wandered the hills of Ercildoun one evening, when he was come upon by the Queen of Elfland. He kissed her, and the price of that kiss was to be borne away with her from Middle Earth and the mortal realms. For seven years, he stayed in Elfland before being returned to the world, gifted thenceforth with Truth.

Digging through my old sketchbooks again, as I do when looking for ideas. I came across this one, that I've long wanted to do something with. Lutes are such beautiful instruments, with the carved and layered rose at the center. My flamenco guitarist friend Stephen Faulk is also an instrument maker, and I'm always fascinated at the detail work that goes into the rosettes, both in his flamenco guitars and lutes. Little bits of carved and inlaid wood.

I did some minor research to make sure that Thomas could have played a lute (rather than a harp) and discovered that the ballads of the Rhymer are some of the earliest mention of lutes in Scotland. Artistic license is one thing, but I just wanted to ensure I was at least in the ballpark of reality, so it was good to find that confirmation. 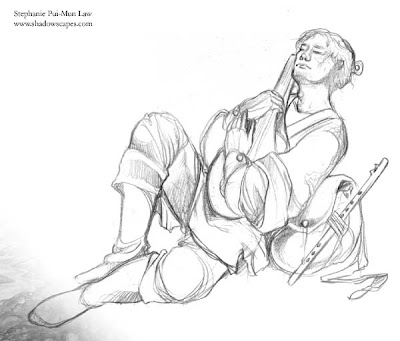 A good starting point, but the sketch was a bit old. It could do with an update. So here came the newer improved version. Surprisingly, it didn't really require much brainstorming or redrawing, but came out mostly as I wanted on the first try without too much erasing and frustration. 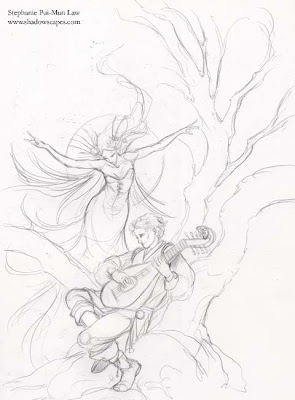 Cleaned up and transferred to the illustration board. Details added in. Scooted the whole composition over a bit to the right so that it would be a bit more balanced. The initial sketch was too heavy towards the lower left corner, but that was the only major change really. 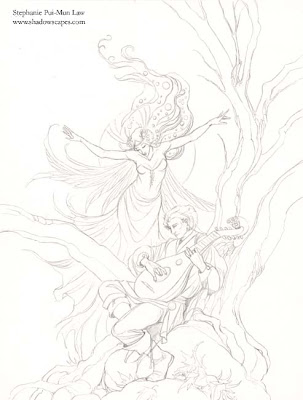 It's a good stopping point for today. Painting it tomorrow, and then that should complete the Bard chapter!
Posted by Stephanie Pui-Mun Law at 8:52 PM