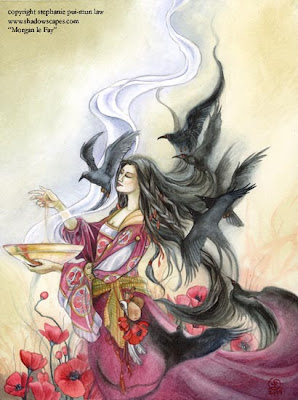 In some versions of the Arthurian legends, as in Malory’s Morte d’Arthur, she was Arthur’s half sister, born of their mother Igraine’s first marriage to Duke Gorlois of Cornwall. In other tellings, the whisper of fairy blood runs through her veins (thus her name “of the Faeries” or perhaps “Fate”) and she was trained in the magical arts on the Isle of Avalon, sacred Isle of Apples which rose from the lake where Arthur received Excalibur. There are some legends where she is believed to be an incarnation of the Celtic goddess of death Morrigan. Yet in all, there is always the thread of an enchantress attached to her. She is paradoxically a healer and destroyer, a charmer, and a sorceress. And when the mighty King Arthur passed from this life, he was taken on a barge to his final sleep on Avalon by three queens: Queen Morgan le Fay, the Queen of Northgalis, and the Queen of the Waste lands.

* * *
Scribbled some notes today for a section on painting flesh tones since I get asked about that often, and I touched on it only very briefly in the first book. Hopefully this pass will be more helpful to answer more questions.

Off to read in bed before turning in. I think that large coffee milkshake a half hour ago might not have been the smartest idea at 11:30PM, but it was oh so good!!! I'll curl up with Ellen Kushner's Thomas the Rhymer. Rereading it, but it's one of my favorite books.

Perhaps I'll paint Thomas next for the Bard chapter. Just two more chapters to go to completion, and then whatever shall I do with the new batch of Free Time??? Perhaps there will be a chance to dig into the lovely jars of new paints from Kremer that I had Sophie buy for me in Germany. I've been itching to get into those!
Posted by Stephanie Pui-Mun Law at 11:59 PM