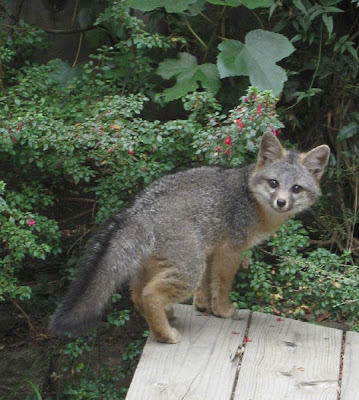 Okay, I lied, that wasn't the last post. But I couldn't resist for this one. Sitting here at my desk working on some layouts, and after a while I noticed that there had been a strange sound going in the background for quite a while. Sounded almost like a bird, but not quite like any of the species I'd usually hear (this includes the random roosters crowing at all hours. Roosters!?! Who's keeping chickens in Oakland??)

I looked up and this little guy was staring back at me. He raced off around the corner whenI rose to get my camera, but a minute later I heard, "yipyipyip!" and looked up to see him standing there again. This time he didn't move while I grabbed my camera and took a picture. I think it's a gray fox kit. I've seen their shadows slinking under fences into the Sausal Creek park area at night occasionally, melting into the moonlit underbrush, but this is the first time I've seen one during the day, and up close.

I think he lost mom (she's probably yawning and asleep in some nice dark den somewhere), but after about 5 minutes of circling round and round the house, he either found her or took his search elsewhere because I didn't see him any longer.
Posted by Stephanie Pui-Mun Law at 3:43 PM