Finally made it to an urban sketch crawl event. I've been meaning to do this for years. Lots of fun. Spent all day in San Francisco sketching and painting!

Started off meeting at the traffic island just off the ferry building in the morning. I've never been to one of these events, but as soon as I got past the crowds in the Embarcadero plaza, it was pretty easy to spot where the group was gathering. Just look for the backpacks stuffed with art supplies, sketchbooks in hand, and ducked heads as those waiting wasted no time.

I've been doing these sketches for over a decade, but I've always only used ink. I really want to try and work color in as well, and I've had a travel-watercolor set for years, completely unused. So I decided this would be a day for firsts. You'd think that since I paint with watercolors every day at my desk for years it wouldn't be intimidating. But something about just doing it on site, without any advanced sketches or preparations is daunting!
Didn't stray very far from the group initially. Across the street from the island, the Saturday farmers market was in full swing. Found a shady perch and did this one, gazing out down Market St.

After the lunch meet up, set off again.
I was looking for a good vantage spot for the bay bridge, but instead I came across this red brick arcade, with a quiet courtyard apart from the traffic of the Embarcadero. There was a fountain, and a decent view of the bridge through the arches. But instead, the quiet of that little space caught my interest instead. In one corner, the arches opened up on a secret green heart on the other side of the courtyard. There was something eerie about the two gray windows high above, looking down like a pair of eyes.

Outside the arcade. And then later, back towards the Ferry Building. There was a man sitting with a little parrot perched on his knee. Taking part of the conversation I suppose.

The sculpture/fountain in the plaza. 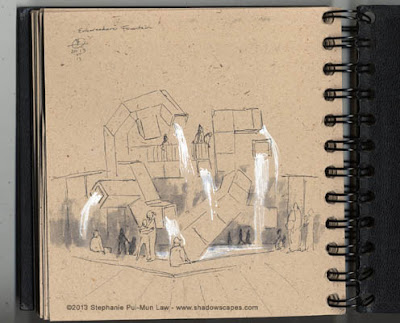 Nearing the 4:30pm final meeting time. Had half an hour to do one final quick color piece, looking out across the park towards Pier 1. 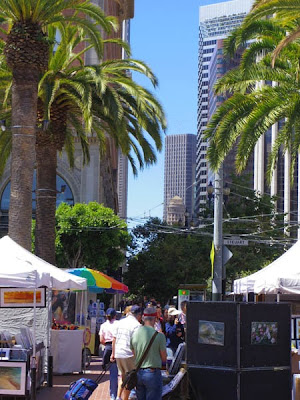 Noontime gathering.Was really neat to see what everyone else had been doing in the morning. 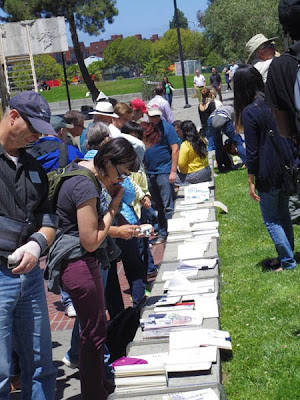 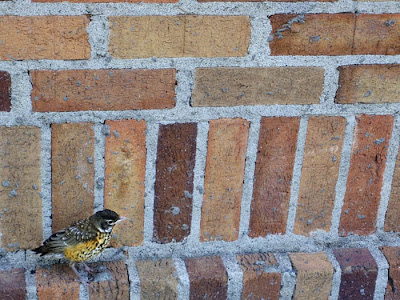 I -wanted- to draw this, but got kicked out just as I started touching pen to paper. Security guard said that it was 3pm and time to close the upstairs area. 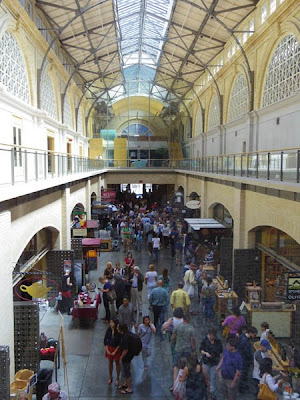 End of the day gathering again. 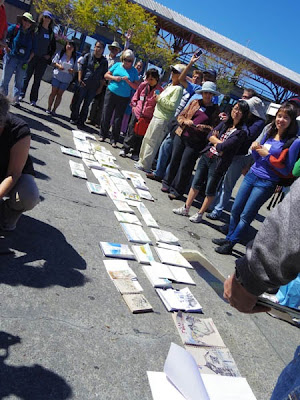