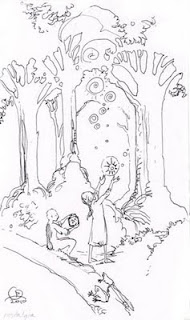 I was reviewing some of the keyword card sketches I've done in the past year, with some thoughts of starting to gather together ink drawings for the next installment of an Inklings book. I came across, for keyword "nostalgia". On this evening when the cricket-orchestra is loud outside my screen door, it stirred some thoughts.

My own nostalgia frequently coalesces from my memory in the form of fireflies.

I left Summit, New Jersey when I was 7 years old, and there are no fireflies in the places I have lived in California. I remember nights that seemed so black and muggy you were swimming through them. The voices of the older kids I played with bounced from the trees around me as we delved into the darkness. Were there flashlights? I don't remember. I remember the blinking pinpricks of light. I remember the pine trees, and fragrant needles underfoot. And fireflies piercing the fabric of the night. I remember catching the sparks in our cupped palms, and watching them glint from inside the glass jars.

I was squeamish of bugs. Elizabeth was the tomboy, the oldest girl, and the alpha of our group. She would pick up caterpillars from the tree outside my house, hold them between her fingers as they slowly curled up into a tight fuzzy black and yellow ball, and then wriggle straight and arch again in a mesmerizing fashion. She would try to put them in my palm, and I would just stare at her with my fists clutched tight behind my back, shaking my head emphatically, "No no no." She would casually pass her hand across the thread of a dangling emerald-green inchworm, and offer me that living writhing jewel. Sometimes I would tentatively take the proffered gifts. I wanted the older kids to like me and didn't want to be excluded from all their games.

But the fireflies needed no social prod to fascinate me, to entice me into chasing after their sparking flashes, and capture their blinking lights in my hands. They transcended being insectile. They were summer magic. Inevitably, after capture, they would glow and flash in our jars for a while, but then the lights would fade, like banked coals. We watched hopefully, but when they lay dark and still, merely insects once again, we reluctantly unscrewed the jars and let the cloud of lights lift up into the night.