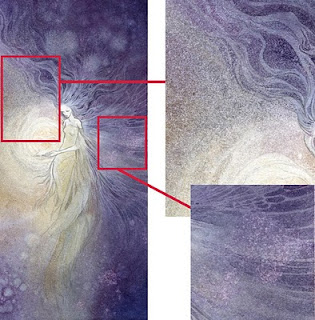 So I stopped spraying after the three layers from yesterday night. I think I reached the limit of what would be paintable. Even though the fixative is supposed to be workable with watercolors, I could see that it was slowly clogging up the paper's porousness. In some areas like the upper left, especially, it starts to get really grainy. Which isn't a bad thing -- it added a new dimension of texture. But I can see that if I kept going, the pigment would just start to roll off. Maybe a lighter hand with spraying in the future, would allow for more layers.

Also, that weird blotchiness that I mentioned this particular sheet of paper had? That never quite went away, but those areas started repelling pigment even more so than others. I was left with a lot of mottled whitish areas that were just refusing to take any color.

I pulled out a white gel pen, and started doing something with those splotches. Some of those splotches I had done on purpose; it was the ones from the paper's weirdness that I had to work at more to integrate. I added a dusting of white highlights in those areas, as well as adding highlights to the figure herself.

A lot of this is something I would usually have done via lifting instead. But because of the fixative, it kind of turns this whole process into something like a melding of watercolor and acrylic techniques. It's watercolor while a current layer is wet, but then it becomes permanent like acrylic once it's dried and I spray it.

Softening the hard edges of the gel-pen white. Adding more hints of blues and oranges to the shading.

Happy with the result, and definitely something I will try again in the future. I was pushing the extreme with this one, spraying so often and across the whole piece, but it was to see how far I could take it. Probably would use it more selectively, and with a lighter hand on the spray nozzle!
Posted by Stephanie Pui-Mun Law at 7:03 PM