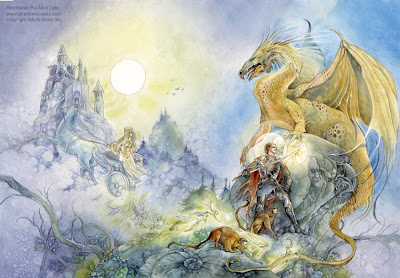 I realized I had forgotten to release this piece last year! Often artwork that is done for publication cannot be released right away, until the product itself is released by the publisher. And then as the months pass, I forget I have the artwork. This particular one was done as the cover for a children/young adult publisher. It is a collection of myths and folktales from around the world of heroes such as Sir Gawain and the Green Knight, Beowulf, Finn MacCool, and Ramayana.

I haven't really had time this month to get much painting done. It's been more of a writing month. The good news is that I've finished a rough draft of The Art of Shadowscapes Tarot: Minor Arcana, and it's currently sitting around for a week or two so that I can get some fresh perspective before going back to proofread it. Unfortunately I probably will not have it available for sale until Fall this year. Main reason being that this tiny house does not have much storage space. And though thanks to you guys I've emptied quite a bit out from the Majors book, the tarot decks that just came in and are awaiting my getting the special edition act together have quickly filled up that space once again! 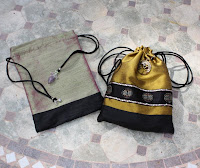 The other thing that has been taking up my time is playing around with fabrics and sparkly gems, one of my expensive hobbies. I've put up a couple of these tarot bags on etsy as well, with more planned. I have some silk-screening ideas rolling around in my head, featuring the design down below. That should be interesting to try out. I haven't done silk-screening in about 18 years. 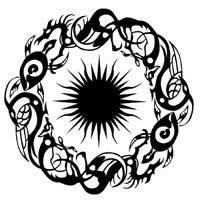