Spent the weekend at PantheaCon. It was a local show, only 40 minute drive away, so I was able to test the waters with leaving Claire alone with Dana for a few days while I stayed in San Jose. I did have to rush home one night, but overall we managed to survive.
Got to hang out with my dear friends Sandra & Goldie, the Wolf Sisters. Strangely, they were the ones that had to recommend PantheaCon to me, coming all the way from Colorado, and here I was with the show practically in my backyard.

On one side of my booth, I had Botanical Preservation Corps, with a fascinating collection of herbs and plants from the Andes, books regarding the edible and herbal applications, and some very yummy raw chocolate. And on the other side was The Sacred Well, my actual neighbor in Oakland as well it appears. We casually discussed the possibility of doing signings there for the Shadowscapes Tarot, when it is released.

And speaking of which it was very gratifying to see all the excitement for the impending release of the deck! At this point, I am as eager as everyone else to see it actually in print. I just sent back to the editor corrections on the book's proofs, and so the wheels of production are spinning, and it looks to be on track for the May release.

A couple more new inks I did during the lulls at the show: 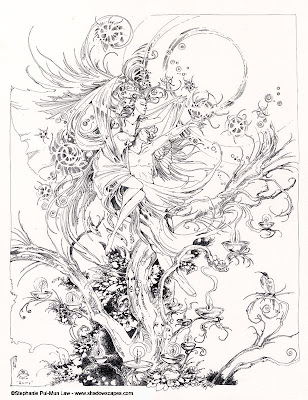 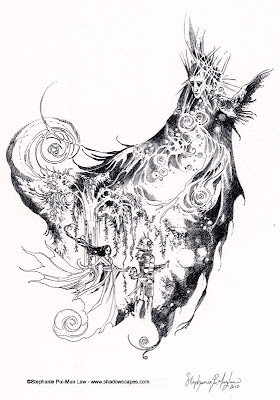 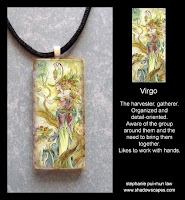 Also, more pendants have been listed on etsy again! Renewed my stock in preperation for PantheaCon.
Posted by Stephanie Pui-Mun Law at 10:36 AM