Progression of a concept: Moonbathing (part 1)

Another chapter of Dreamscapes II completed, so now I'm at the halfway point. Right on schedule for sending in to my editor at the end of this month. Going to let it sit for a while and review one last time before mailing in next week. Meanwhile though that leaves me free for my own devices once again. At least, for one week. Plenty of time for another piece!

Had this idea a month ago. Flash of an image as I was lounging in bed reading Rain of Gold by Victor Villasenor (which my flamenco partner claims is her Favorite Book Ever) before turning in for the night. Hopped out of bed over to my desk to snatch up my sketchpad and pencils and jumped back in before the warmth could leave my cozy little spot.

Hurriedly scribbled down a thumbnail to get the essence of the piece. Scrawled notes on the sidelines to remind myself that the tree limbs would fade into the night sky like phantom branches. Little details like that which I would probably otherwise forget come morning with the sunlight to burn off the haze of sleep and Ideas-From-The-Night-Before (which from experience always seem a lot more brilliant at the moment then they do upon more sober and wakeful reflection afterwards).

Next day I tried a few sketches, but wasn't able to get the figure to work for me. It stubbornly refused to synch up with the image that had flashed in my head the night before. Ultimately set it aside for the time being. I've found over time that it's sometimes just better to quit banging my head against a piece that isn't working. Leave the sketches. Work on something else. Then when I'm flipping through my sketchbook for ideas and least expecting it, that sketch will suddenly find its place and work.


Well it almost played out like that this time. I was flipping through my sketchbook silently bemoaning the fact that I was having trouble with motivation these days. An affliction that usually did not plague me. In fact I had a conversation with James Browne earlier in the day about just how fickle the muse was at times. She comes, she goes as she pleases.

I came across the thumbnail and the two initial attempts, and again was intrigued by the prospect, enough to try for a third sketch. And suddenly it was there. Like Athena, she sprang full fledged from my brain, complete with a title. It's funny how inspiration just strikes like that. I can agonize over some sketch and pose for an hour, give up on it and start anew only to have The One within 5 minutes. A fresh viewpoint is sometimes all that's needed to be injected into a piece.

So here she is, ready to be painted. 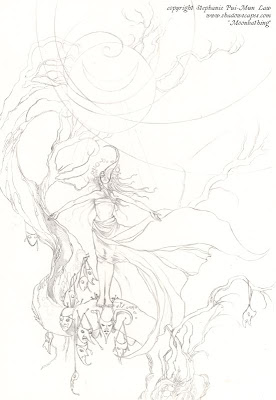