A grey-green cup of jade 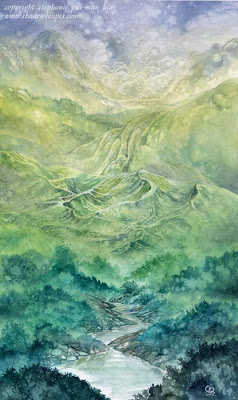 And many a night it seems
That all the valley fills
With those fantastic dreams.
They overflow the hills,
So passionate is a shade,
Like wine that fills to the top
A grey-green cup of jade,
Or maybe an agate cup.
-- William Butler Yeats, "The Dreaming of Bones"

Painted as a commissioned piece for someone who was fond of my backgrounds. As I was posting it though, that little bit from Yeats' "The Dreaming of Bones" came to mind that I had read in college. It's written in the fashion of a Japanese Noh play. Very stylized and symbolic. But it's a haunting tale that draws upon the story of Diarmuid and Devorgilla, who for love of one another forsake their country; he brings a foreign army across the sea to fight his own people. And so the two lovers are cursed, as are their ghosts centuries later, doomed as dreaming bones.

But that segment in the opening part of the play/poem always resonated with me. I loved the image of: "A grey-green cup of jade."
Posted by Stephanie Pui-Mun Law at 2:52 PM