Sometimes you just have to mess around to stir things up a bit. I had a dream a couple of weeks ago, and I wanted to paint it. And by the way, though I've been asked it often, I rarely if ever paint my dreams. They're way too boring and prosaic to make good images. I mean, unless you like to see a painting of an artist freaking out after forgetting to pack or ship things to a convention (That's an illustrator's version of the stereotype "Student's Nightmare"...you know, going to school and finding out that it's final exam time for that history class you never signed up for, and by the way, it's in French).

Anyway, getting sidetracked. So I DID have a dream I wanted to paint. But it involved much darker tones and saturation than I usually get. So I dug through the closet and pulled out everything that looked like it might be useful, which included: Stamp pad refill ink, India ink, metallic watercolor medium (that a friend gave me from a stash he found in his closet, thank you Stephen), granulation medium, frisket, rubbing alcohol, and scrap pieces of illustration board, some with washes that I had started once upon a time then discarded.

I set about making a mess with those. And after a half hour of fun, I had this: 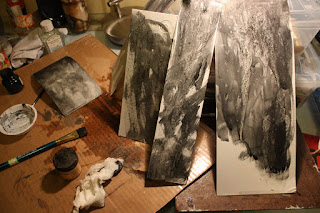 I propped them up to let the ink drip down the page (ala Jackson Pollack & UC Berkeley's stuck-in-the-60's art classes!) making bigger runny messes on my desk and drawing boards. After that, I walked away and waited for them to dry.


Over the next week, I've done these pieces with the results of that initial ink-mess. With the addition of Daniel Smith watercolor ground (for the broad areas of white), white gel pen, and watercolors. My initial impulse to paint that dream hasn't really materialized in any of these, but they've spawned a host of other images. It's a very un-planned process. I'm just looking into the shapes that the texture of drying paint and ink leaves, and then pulling out details and focusing them into images. 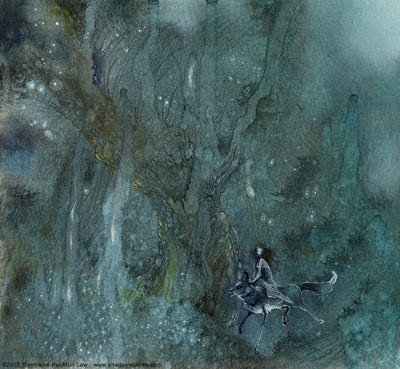 These have all been relatively small pieces. Hopefully you'll be seeing some of these techniques combined with my standard Steph-watercolors for some larger and more ambitious images in the near future. I have some ideas of where to go with it, but so far it's rather nebulous.
Posted by Stephanie Pui-Mun Law at 5:19 PM