Trickster art previews from the next book

Next project on the horizon now? I've made some brief mention of it in my deviantArt journal, but here it is in more detail.

Brought to you by Impact Books, the same guys who published my Dreamscapes last year. Working on a followup book now.

Kelly and Pam approached me at GenCon last year to ask if I'd be interested in doing a second book. I told them honestly that while I would love to, I wasn't quite sure what I could impart in a second book that I hadn't already covered in the one. I really did put everything into Dreamscapes, or I thought I did at least.

A bit later in the year, after the shows, Kelly asked me again, this time proposing maybe something to do with tarot.

I mulled over that a bit. Tarot's rather a narrow and specific topic. But what about what inspired me to do my tarot to begin with? What about the folklore and legends and myths and archetypes that the the tarot and major arcana in particular embodies? The tarot was just one mode of my expression of those archetypes.

Here will be another. The chapters will not be as in depth to a specific subject as Dreamscapes was; but more of an exploration of a multitude of fantasy archetypes, and examining how to touch on them and draw inspiration from tales, and of course lots more specific step by steps, drawing and watercolor techniques to concentrate on for each segment. 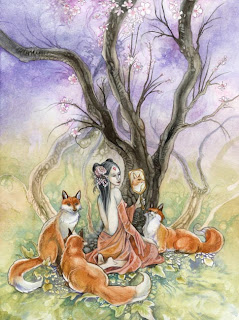 The chapter I just finished is on Tricksters. With as many forms as they have wily pranks and methods of escape from sticky situations of their doing (or undoing), Tricksters are a favorite of mine. The profusion of foxes in my artwork alone should speak for that. Specifically the fox spirits huli jing of Chinese stories (and of course there are kitsune in Japanese tales as well). My mother used to tease (and still does) my father not to fall victim to the illusions of huli jing when he was off on business trips to Asia.

When I was studying at Berkeley, I was poking around on the internet one day and came across a story, about a man who had the (mis)fortune to be loved by two women, both of who came into his life under mysteriously circumstances. One of whom turned out to be a ghost, and the other a fox spirit. After reading it, I rushed off somewhere, in that perpetually late state a student is in.

I found I couldn't stop thinking about that story though, so when I had a chance to catch my breath and free time presented itself in my life again, I tried to hunt it down. I was dismayed that I couldn't find it.

Used bookstores press in from all sides of Berkeley. You could go to a different one each day of the week. Finally one day I came across a book entitled Chinese Ghost and Love Stories. It had a horrid yellow cover and the binding was half falling off, and it was an English translation of a German translation of "The Liao Chai Stories" (now there's a roundabout route of translations!) You could almost imagine the puff of dust flying escaping as the pages crackle open.

But it had the story I was searching for, as well as many others. Chinese fairy tales: ghost stories, and fox spirit stories. In which the ghosts and spirits are not evil beings; though their morality is not quite in step with that of humans. They are drawn to and fascinated by humans. They long for an essence they no longer (the ghosts) or never (the fox spirits) possessed. Like moths to a flame. They hover around the bright flare of humanity, sometimes wreaking havoc with the strength of their yearning. And yet they are an integral part of the world and the natural order of the universe that they exist in, and there was an intimacy and a naturalness to their stories.

More ramblings and art previews from the book as I go!
Posted by Stephanie Pui-Mun Law at 10:25 PM