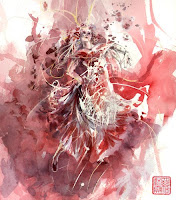 It's evening, close to midnight. I've just come home from La Taza de Cafe after a show with Middle Eastern band, Garnada. Muscles ache with a pleasant twinge of exertion. A slight flush to my skin from the one glass of sangria I drank - the gift of Asian genes that turn my cheeks bright red with the mere scent of alcohol. The blush makes people think I'm drunk even when I've barely had a few sips.

Scrub the makeup from my eyes. I hate wearing makeup. Bern (the other dancer) and I both. The two of us wiping the lipstick off as soon as the show is over each time. The musicians laugh when they see us doing that. I think of shellac when I touch that crimson stick to my lips, painting a red "O". I think of the shellac Stephen showed me once in his studio, that he coats on the guitars he makes. It turns the rough sheets of wood into gleaming and beautiful instruments, coated in a layer of clear honeyed gold.

An old friend showed up this night to watch; from my software programmer days. Another lifetime. Sometimes it feels I have many lifetimes compartmentalized into this one existence. Can all the people of those disparate identities coexist in the same space? Or would that cause an implosion?

He got a nice front row seat. Not in the "poor people" section as we call the back side of the restaraunt, behind the pillar where the late reservations are seated. No, it was front and center, in the "our footwork will rattle the silverware right off your plate" (and sometimes right off onto the floor!) table.

He knew I danced, though he'd never come to see it before. Having seen it now, he had questions: How long have you been at it, where when what?

Dana loves it when I tell people of the Berkeley days - when I first caught the bug. It's an addiction I was warned by someone, by multiple someones, right from the start. You'll catch the bug. The first classes I took whetted my appetite. Then I met a guitarist, just starting out as well. There was an old house on the lot that he rented; squeezed right up against the main house with barely any space to breathe between them. This is the Bay Area after all. A quarter acre for a lot is huge. Most places...much smaller than that. The landlady ignored that second house, letting it fall to disrepair. It had no electricity, no water. The carpet (where there was any) was old and dingy, and the wood stripped.

We started to use it for practice space - me, the guitarist, and another dancer. After classes and homework and studying - computer science, biology, chemistry, anthropology; we'd meet there, slip out the back door of the main house and into that run-down shack. Candles and matchbooks in hand. Set the tea lights all along the windowsills. The light flickered up at the bare and useless bulbs in the ceiling, and glimmered in the black mirrors the windows turned into.

He'd play his guitar. Seviannas, Alegrias, Solea (my favorite), rippling through the small space. Anything, everything. We'd dance. Sometimes we'd practice what we had learned. Sometimes we knew the styles from class. Sometimes we made it up. It didn't matter, there were no critics present. The shadows shattered across the walls from the multiple light sources, shivering with the surreal aspect of it all. And then sometime after midnight - 1AM, 2AM, there would be mutual consent that the night had to end. Blow out the candles, and head back out into the cool night to our apartments scattered across campus.

I have romantic notions at times. Like wanting to take my sketchbook out to sit on the rock beside the pond in Tokyo to sketch the koi. Within fifteen minutes the mosquitoes dissuaded me from that fancy when I realized that in the time it had taken me to get situated and dig for my pencils I had acquired at least three golf ball sized bites along my legs. And that rock was not nearly as comfortable as I had imagined it would be! Or wanting to just close my eyes and drift when floating in that wonderfully buoyant salt water embrace of the ocean...but self preservation says you idiot, you know how dangerous that current could be? Eyes open, watch out where you are. Or the magical garden I dreamed of having when I was bouncing around rented apartments, for the house I would one day own...but that garden is now at the mercy of my less than green thumb, paired with relentless allergies.

Maybe it's just memory that alters and paints those flamenco sessions with a gloss of romanticism, but I don't believe that's the case. By contrast to those ill-fated notions of what I think I want reality to be, this actually was. I think even then that I knew it was a strange reality I was participating in that was an odd disjunct from the daily routines of studying and programming and stressing and exams; an odd gleaming thread in the fabric of that time.

My rehearsal sessions these days have a much more mundane veneer. Though now there are no longer candlelit jaunts in forgotten houses, that memory for me is linked with flamenco forever. Ingrained memory of exhilaration, abandonment, freedom, and utter immersion in movement and music.
Posted by Stephanie Pui-Mun Law at 11:26 PM