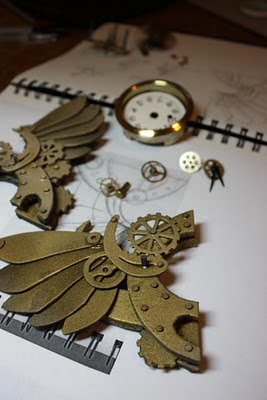 I'm getting super-caught-up in making Claire's Halloween costume. I don't even know if she'll tolerate WEARING half the stuff I'm making. I figure if she doesn't, I'll use it all for myself at a convention someday. :)

Steampunk wings. Thus far made completely from these foamie sheets I bought a while back for some other project, then spray painted coppery colored. So it's super-light. Which it will have to be if I'm to get Claire to wear it (and then once there, she'll hopefully forget that it's on her back). I'm having a blast. And actually getting some painting ideas with this too that I think I'll have to tackle once this current October obsession is past.

The stuff on the bottom right is Dana's poor dissected chess clock. He broke it the other day and was about to just toss the whole thing in the trash when I cried out, "WAIT!" He was completely bewildered as to why I would want clock guts. Why wouldn't I want clock guts?!?!!? Anyway, still mulling ideas on integrating some of that stuff in as well. 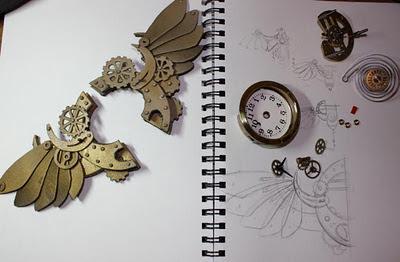