This Chinese fable was first told to me by someone when I was in college.

The youngest daughter of the Emperor one day took a boat out to sea. As she sailed, the Ocean grew fierce and a storm blew up without warning, capsizing the boat and drowning the girl. She was transformed into a magical bird, living on an island rock in the middle of the Ocean. Each day she would fly back and forth from her rock to the Ocean, dropping one stone or twig at a time into the pounding waves, crying, "Jing wei jing wei!" as she did so (and thus how she came to be called the jing wei bird).

One day the Ocean grew tired of her pestering. "Why do you throw your little stones into me day after day?!" the Ocean roared.

"I will fill you up with my twigs and stones, that you claim no other hapless victim!" the jing wei bird responded.

The Ocean laughed. "Foolish little bird. You cannot fill me up! I am vast and endless!"

The little bird was not deterred. "I will continue to throw stones into you, and I will succeed even if it takes me a thousand years!"

And so the saying came about that One has the indomitable spirit of the jing wei bird.

* * *
From the sketchbook, scribbling after Claire went to sleep the other night: 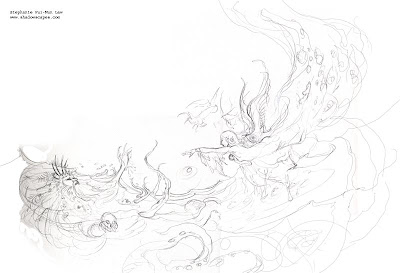 Refined sketches for transfer to the illustration board. The Ocean: 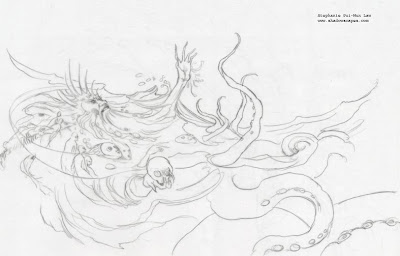 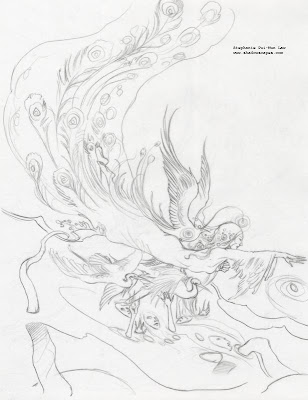