Thanks for all the feedback regarding what you would like for the minor arcana book(s)! I will definitely take everyone's input into consideration when it comes time to make that decision. Though it will be a while off yet still.

* 6 weeks - Finishing the borders - at the current rate I've been going at about 1 per day, and with 42 more borders to do, that's about a month and half.
* 6-12 weeks - Gathering sketches, writing text, and doing layout - No telling really how long this would take exactly. Hopefully in a few months Claire won't need to be held constantly, so I can dig around for old sketches, and work on layouts at my computer more easily. So it's a wide estimate. Also, I'll probably be picking up commissions again around this time, so it'll fit in between projects.
* 2 weeks - Proof from the printer - The printer takes 1 week turnaround to get a proof of the book to me. Add in the shipping times and a chance for me to look over the proof and approve it.
* 4-6 weeks - Shipping of final books - They've got a long ride chugging across the Pacific Ocean to dock here in Oakland!
* Add that up, and it looks like somewhere in the range of 5-6 months before I'll have them here on the doorstep ready to send out. Which means it'll probably be ready around the time that the deck is released by Llewellyn.

* * *
Meanwhile, enjoy these last few Wands borders for the Page, Knight, Queen, King. After this, on to Cups I think. I'm feeling like drawing some fish! 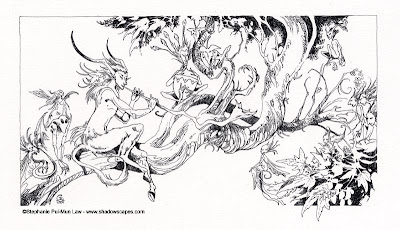 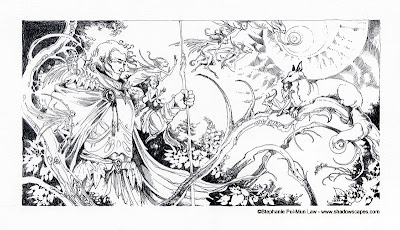 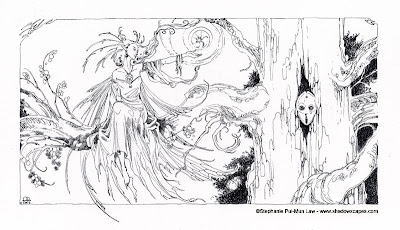 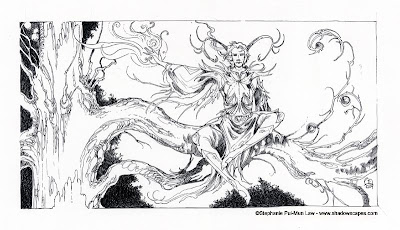 Posted by Stephanie Pui-Mun Law at 9:35 AM