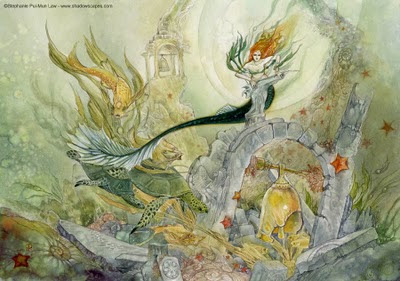 
There are many legends of vanished cities, sunk beneath the hungry ocean waves. One of the most famous was the beautiful city of Ys, off the coast of Brittany, in the Bay of Douarnenez. There was once a King of Brittany, named Gradlon. He fell in love with a druid woman, a Queen of the North, the sorceress Malgven. Together, they slew her husband, and took his magical horse Morvarc'h who could fly across the shifting seas as upon land. The lovers fled back to Gradlon's lands. Their journey across the seas took so long, that Malgven grew pregnant, and gave birth while still in transit. Their daughter, born on the shifting ocean waves, was named Dahut.

Malgven died in the birthing, but to honor her, and as a gift to his daughter, King Gradlon built the most glorious and beautiful of cities. There were great white temples to the old gods, fantastic towers and spires and palaces. These were all built below the sea level, and protected from the deadly waters by bronze walls and a gate, to which Gradlon held the only key. He named this city Ys, and its beauty was to be rivaled by no others.

Dahut grew to be a lovely young woman, doted on by her father, but she reveled in debauchery. Ys was transformed into a haven for her wicked ways. Each night, she took a new lover, and in the morning had him executed. One day, a strange knight, clad in red armor came to Ys, and Dahut was smitten by him. He convinced her to acquire the key to the city gates to satisfy his whim and prove her love. In drunken giddiness, Dahut crept to her sleeping father's bedchambers that night, and lifted the key from the chain around his neck. She brought it back to the red knight, triumphant; but the knight turned out to be none other than the devil!

The gates to Ys were opened, and high tide and storm that had been raging all the while, came crashing through the bronze doors, flooding the city. Gradlon awoke and instantly knew what had happened when he found the key missing. He raced through the palace to his magical steed Morvarc'h, flying up above the waves that quickly were enveloping Ys in their saline embrace.

When he caught sight of Dahut, he pulled her up behind him on Morvarc'h, attempting to fly away, but time and again she kept slipping, and Morvarc'h struggled to stay above the clawing waves. A Saint appeared to Gradlon, telling him, "You must abandon the demon who sits behind you." Gradlon resisted, but eventually Dahut slipped from his grasp, falling back into the ocean, where she was transformed into a mermaid, forevermore to swim among the ghostly bells of Ys. 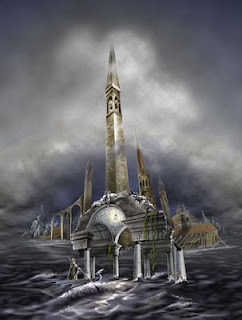 What seems a very long time ago, back in 1998, I did a painting on this theme. I was not yet working in watercolors back then. Digital was my main medium. Here's a little glimpse of one of the (really bad!) pieces I did back then. So...uh...yeah...I think practice every day for over a decade has paid off.
Posted by Stephanie Pui-Mun Law at 10:24 PM