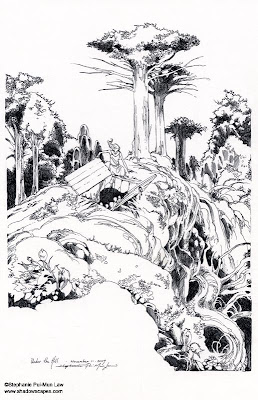 There's a strange aspect to Sausal Creek:
At a glance it's a tangle of wild vines, old oaks, and giant pines. I walk along the path at the top of the ravine that cuts from my house to be swallowed by the green. And then suddenly in the middle of the path is a manhole cover. Incongruous, like it was dropped there in the dirt. A prop. But no, you can hear the rush of water far down below that dark iron circle. The sound is as real as the louder rush that trickles along the open stream at the base of the ravine.
It's an overlay of the man-made and the wild, a weird juxtaposition; like a lamppost in the middle of the frozen forests of Narnia. Instead of being a reminder of the streetlamps and roads I step off of when I set foot on this path, the manhole cover seems instead to be a marker, a footprint to follow down into the dense woods. As if to say, "Someone else was once here." And now there is just a dirt path slowly obscuring the evidence. Keep walking along the path and perhaps I too will be swallowed into the green.

Crouch down over that dark hole in the path. What lies beneath this hill?
Posted by Stephanie Pui-Mun Law at 11:52 PM